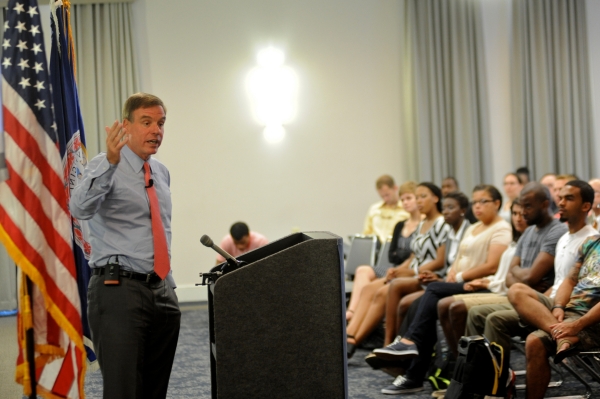 With the national student debt load now exceeding $1 trillion, Warner said he worries graduates won't get the same opportunities he had after leaving college.

"This is an issue where if we don't get it right, it can limit our options going forward as a nation," Warner told the crowd of about 100 ODU students.

Warner described how, as a recent Harvard Law School graduate, his $15,000 student debt didn't keep him from trying, and failing, to start two businesses. Then his third attempt at entrepreneurship, the cellular telephone company Nextel, made him a huge financial success.

"I was able to take those risks because while 15 grand was a lot of money, it didn't crush me," Warner said. "We've got to figure this out."

The accumulation of debt by post-secondary students "has an effect on our economy. On homeownership, on entrepreneurship, on when people choose to get married," Warner said.

"It can crush a generation's ability to realize the American dream."

The senator discussed some of the bipartisan proposals he has brought to Congress, such as the proposal with Sen. Marco Rubio (R-FL) to consolidate, simplify and improve income-based repayment options for federal student loans, and a proposal with Senators John Thune (R-SD) and Kelly Ayotte (R-NH) to allow employers to set aside pre-tax compensation for employees to pay down student debts.

In addition, Warner stressed that students need to have better access to data about how much their education will cost, and the career prospects for their chosen academic major. He also urged the students in attendance to keep the pressure on lawmakers like him.

"I hear more about student debt than just about any issue, and not just from students. I hear from parents, grandparents. In the last two years, this issue has just taken off," Warner said.

In introducing Warner, Old Dominion University President John R. Broderick said the senator was a great supporter to ODU during his time as governor of Virginia. Broderick acknowledged that the issue of college affordability is a significant issue, and mentioned some initiatives Old Dominion has undertaken to address it, such as the Learn and Earn Advantage Program (LEAP) which provides on-campus work opportunities for first-year students in four categories: administrative assistant, event assistant, support services assistant or academic assistant.

This past school year, 145 students participated in LEAP.