Trip to Africa a Summer to Remember for Recent ODU Graduate 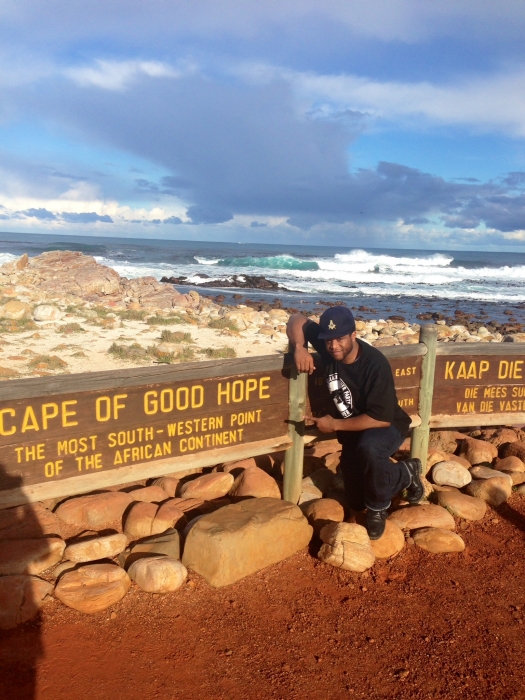 Hiawatha Clemons III at the Cape of Good Hope

For Old Dominion University graduate Hiawatha Clemons III, it was a summer to remember.

Clemons, a U.S. Marine Corps veteran of the Iraq war and 2014 ODU human services and special education graduate, served an internship with the nonprofit National Institute for Crime Prevention and Reintegration of Offenders (NICRO) in Cape Town, South Africa.

Clemons, of Virginia Beach, was a special education student himself growing up, and has made it his mission to do outreach through the charitable organization The Mission Continues. He wrote about his trials and triumphs as a special education student in "Stand Up! 75 Young Activists Who Rock the World, and How You Can, Too!" a book published in 2013.

For NICRO, Clemons lectured to at-risk youth, domestic violence victims and students from the school where he was stationed. Clemons said the curious young students treated him like a "rock star," bombarding him with questions about America, his time in the military and experiences they have never had.

Clemons said it was moving and powerful. But even more impactful were the lessons he learned spending extended time in a still-developing African country.

"The first day on the train to work, I would see things that would change my life forever," Clemons said. "As the train was passing by different towns, I could not help but notice the poverty level. I would see houses crammed together, shacks, shanties and kids carrying buckets out of the back of those houses to empty out what appeared to be waste."

That revelation made Clemons want to dive further into the culture of South Africa, to see how a difficult life in the townships shaped young South African men and women. The thing that surprised him the most was despite the obvious adversity, the townships beat with a pulse of happy humanity.

"For a place that had no running water or electricity, these people still seemed to be very much alive," he noted.

Besides his internship work, Clemons was inspired by a visit to Robben Island, where Nelson Mandela was imprisoned for more than 30 years as he fought for equality for all Africans.

"Seeing what he endured made me proud to be in his country for his birthday which was considered a volunteering holiday there. And when July 18th (Nelson Mandela Day) came, I went straight to an orphanage and volunteered with the kids. I really hated that I had to leave them," Clemons said.

Now back in the United States, Clemons said he'll never forget his experience visiting Africa, which also included a visit to Senegal - a port of departure for many African slaves that were shipped to the Americas.

"I thought of my ancestors who were shipped off from this part of the country and now here I was on a layover as a free man, which was something I just could not overlook," he said.

Clemons joined the Marine Corps out of high school, and in 2005 was part of a unit of soldiers in Iraq that narrowly escaped being killed by an improvised explosive device. That experience, compounded by a difficult readjustment to civilian life, convinced Clemons to pursue a career in counseling to help young people facing similar struggles.

Clemons, 30, graduated in August from Old Dominion, and will start graduate school in January, pursuing a master's in clinical mental health counseling.

He also wants to continue his quest to have special education viewed more favorably as regular education.