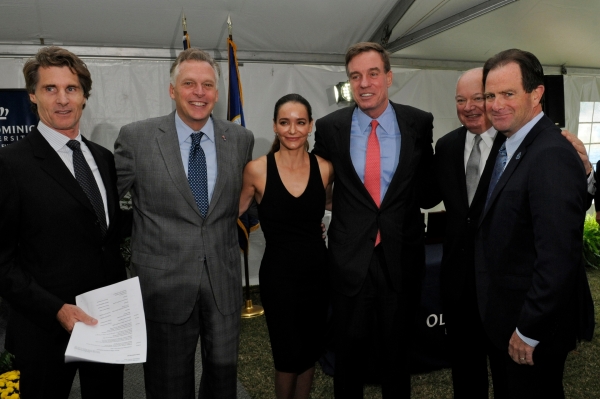 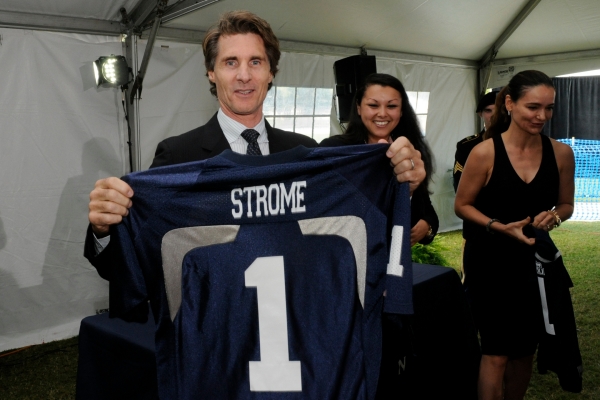 During the ceremony, Mark and Tammy Strome were presented with football jerseys by Mariam Abdelhamid (middle background), who is the graduate assistant in the Strome Entrepreneurial Center.

"I came from a small-world place," he said. "ODU opened my eyes to the world."

Strome grew up on a New York dairy farm and went on to become a successful investment broker before later establishing Strome Investment Management and Strome Securities L.P. Still, he reiterated several times that he considers himself "unremarkable."

Before he entered the business world, Strome earned a B.S. in engineering from ODU in 1978 - but it almost didn't happen. He credits "a mysterious angel" in admissions who, instead of rejecting his application, accepted him on probationary terms after a telephone plea from his father.

"That was the moment a very unremarkable person was given an opportunity at ODU," he said, adding that it directly led to him "giving birth" to the Strome College of Business.

Strome's remarks were made at the event, which also included Norfolk Mayor Paul Fraim, among other dignitaries, to officially dedicate the Strome College of Business.

"These are wonderful and exciting times for the Strome College of Business, its faculty, students and the community," he said.

In June 2014, the ODU Board of Visitors unanimously approved renaming the College of Business and Public Administration to the Strome College of Business. Friday's event was preceded by a Thursday evening dedication of the Strome Entrepreneurial Center, which will provide mentoring and guidance to students from across the university's six colleges.

"I was completely unprepared for college, but in my back pocket I had a work ethic that saved me," Strome said. "I want to be an inspiration to a sea of unremarkable people. I hope, if the Strome College stands for anything, it stands for taking truly unremarkable people and giving them inspiration and a few tools so they have a shot at becoming remarkable leaders. ODU trained me as an engineer, but life created an entrepreneur. I want students of all sorts to have exposure to the entrepreneurial perspective."

In remarks to the more than 250 people who gathered for Friday's dedication, ODU President John R. Broderick noted that the Strome College of Business is among the top five percent of business programs in the world.

"No matter what the decade, ODU remains committed to preparing the business leaders and public administrators of tomorrow," he said. "At Old Dominion, we not only educate tomorrow's leaders, but we serve as a hub for groundbreaking research, innovation and economic growth."

President Broderick added that the Strome's gift has inspired other alumni, innovators, business professionals and community leaders to also make investments in ODU's "entrepreneurial ecosystem," which has ignited a cross-discipline culture of entrepreneurism.

Senator Warner, a successful entrepreneur himself, said the Strome College of Business and related initiatives being launched at ODU are going to be an "unbelievable asset, not just to ODU, but to the whole community.

"It's important that we continue to promote entrepreneurship. Eighty percent of net new jobs over the last 30 years are from startups," he said. "ODU, if it were a stock over these past years, would be a stock that has gone straight up - grown to be extremely successful. The Strome business school will continue that tradition."

Mayor Fraim remarked that Norfolk is no different from any great city that has a great university as a foundation and noted that ODU's "world class research and academic programs contribute more than $2.1 billion to the region's GDP (gross domestic product), making it a resource for addressing challenges.

"ODU students have access to innovative programs that go hand-in-hand with cutting edge business innovations that will prepare them to fill 21st century jobs that will help leverage existing resources to attract and retain businesses in the city," he said.

Governor McAuliffe, also an experienced entrepreneur, said the Strome College of Business could not come at a more important time for the state, and thanked President Broderick for his "outstanding leadership at ODU."

He said Virginia can no longer afford an "old economy" that relies on federal government spending on defense and other programs that are currently threatened by significant budget cuts.

In building a new entrepreneurial economy, "everything starts with young people. This gift will help for 40 to 50 years in laying the seed corn, Gov. McAuliffe said, referencing the practice of saving seed from one year's harvest for planting in the subsequent year.

"We need to foster entrepreneurship, risk taking, innovation, creativity," he said. "Mark and Tammy's gift is allowing us to take it to the next level."