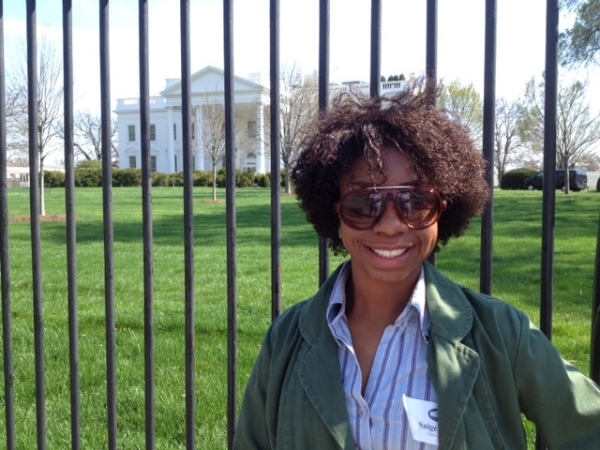 Saige Hill at the White House

Saige Hill, an Old Dominion University senior, spoke at the White House Friday, Sept. 19, about efforts on the ODU campus to prevent sexual violence, and was part of a news conference in which President Obama and Vice President Biden launched a nationwide "It's On Us" campaign against sexual assault.

Hill was the only student on a five-person panel, which discussed efforts around the country, especially at universities such as ODU, to protect against sexual predators.

An intern with the ODU Women's Center, Hill has served on a White House task force to engage students in sexual violence prevention.

She was the winner earlier this year of the Evon-Broderick Award for Community Engagement and Service. This annual ODU award was established by President John R. Broderick and his wife Kate, and is named for their mothers, Joan Evon and Ellen Broderick. The award recognizes ODU students, who, like the award's namesakes, exemplify a commitment to service and civic engagement to the university and surrounding community through superior leadership and service.

Hill also was a winner of a Friends of Norfolk Katherine A. Treherne, M.D., Scholarship when she graduated in 2011 from Lake Taylor High School in Norfolk. The late Dr. Treherne served on the Board of Visitors of ODU.

La Wanza Lett-Brewington, director of the ODU Women's Center, said before Hill's appearance that she was excited, as well as confident in the student's ability to deliver her important message. "She's very articulate," Lett-Brewington said.

Here are remarks Hill prepared for the event:

QUESTION: You are a part of your school's sexual assault response team. How does that work?

Good morning and thank you for your question. I would first like to start off by telling you all a little about myself. Again, my name is Saige Hill, and I am a senior at Old Dominion University in Norfolk, Virginia. Ever since my childhood, I have shown interest in promoting change through advocacy and service. Furthermore, as a young woman in college whose well-being has been threatened a few times before, I feel that it is essential that I do my part to help make my campus a safer place.

Over the past three years, I have had the pleasure of working with the Old Dominion University Women's Center. The Women's Center offers programs and services designed to promote empowerment and leadership, and is a key resource for victim advocacy, crisis-response, and awareness and prevention training. The students, along with faculty and staff at Old Dominion University, are working diligently to build a safe campus for everyone. We have zero tolerance for violence of any kind, and our goal is to become a model for sexual assault prevention and bystander intervention programs. In fact, the SART of Old Dominion University has been asked to travel to other campuses to teach our best practices for sexual assault prevention.

SART stands for Sexual Assault Response Team, and I serve as the student representative on the SART committee. The response team is a collaborative group of campus and local officials committed to providing sexual assault resources, victim-centered and trauma informed support services, and prevention education for Old Dominion University students, faculty, and staff. From installing new security cameras to providing a ride or escort for students traveling alone, the SART plays a critical role in implementing a sexual assault prevention strategy and ensuring that our policies are current and effective. To supplement the Sexual Assault Response Team, we have created various programs on campus that are proven effective.

One program is the M-Power Peer Education Program, which serves our student body as an educational resource on the issues of sexual and relationship violence. I am a veteran peer educator, and our job is to engage our fellow students in activities and discussions that promote a campus culture of safety and respect. As an M-Power Peer Educator, I have seen how workshops and programs designed and led by students can bring about an increase in student engagement on many levels. Through M-Power, more individuals and student organizations have gotten involved in working to raise awareness.

Another initiative is the internship program at the Old Dominion University Women's Center. Last year, I also worked as the Advocacy and Empowerment Intern at the Center. In this role, I have coordinated our Red Flag campaign to raise awareness about the prevalence of dating violence on university campuses. The success of our campaign has been due to our collaboration with students involved in the National Pan Hellenic Council, Student Government Association, and the athletic program.

One more initiative I would like to mention is the Men of Quality Program. Old Dominion University understands the need of male-centered programs for prevention and advocacy. Last year, the OId Dominion University Women's Center and Counseling Services formed an allied group called Men of Quality. This group works closely with male students on campus to prevent gender- based violence and promote healthy masculinity. My male colleagues are peer educators, event organizers, leaders, and advocates for gender equality and respect. The work that my fellow Monarchs participating in Men of Quality are doing connect with the new initiative being presented today.

For the students, faculty, and staff of Old Dominion University, sexual assault awareness and prevention is a personal responsibility. This October, myself and other Old Dominion University student leaders are organizing the first Big Blue Take Back. The Big Blue Take Back will allow us to teach the practices of the Sexual Assault Response Team to encourage students to play their part in ending interpersonal violence. During the event, we will celebrate the stories of survivors, the resilience of the human spirit, and the power of people coming together to end injustice. The Old Dominion University Women's Center, Counseling Services, Police Department, and other parties play a critical role in the implementation of the SART on campus. I hope the work of the Old Dominion University Sexual Assault Response Team not only continues to promote positive change on our campus, but also serves as a model for other colleges and universities. Thank you.