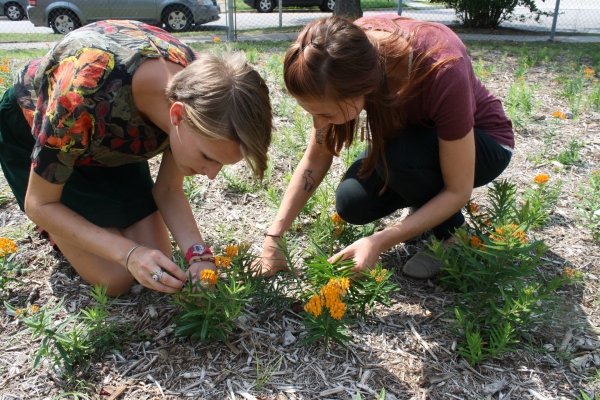 After a successful launch this past spring, the "Monarchs for Monarchs" program to create monarch butterfly habitat around campus will be expanded this fall, and will include a public service component.

In the spring, student volunteers worked to prepare small plots of land around campus, then planted native milkweed plants in an effort to provide food and shelter for migrating monarch butterflies.

Some of the plots were more successful than others, but milkweed plants near Old Dominion University's Arthur and Phyllis Kaplan Orchid Conservatory, and the ODU Inn attracted a healthy variety of insect species, including monarch butterflies.

This semester, Tatyana Lobova, senior lecturer of biology in the College of Sciences, will include a service component in her biology class. Her 400 environmental sciences students will learn about the program, and about the value of milkweed as a shelter and food plant for the entire lifecycle of the monarch butterfly.

Then in October, her students will prepare a plot in the small park on Bluestone Avenue across from S.B. Ballard Stadium. Next spring, the goal is to plant every different species of milkweed plant native to Virginia in that space, as the Monarchs for Monarchs campaign expands.

"For their labs as part of the environmental sciences course, we're going to do a week of service learning," Lobova said. "We're starting to plan how to extend the program into city neighborhood parks, and we'll prep the beds for planting next spring."

The Monarchs for Monarchs program is a partnership among the Department of Biological Sciences of the College of Sciences, the ODU student Botany Club, the Orchid Conservatory, the ODU Grounds Department and Norfolk Botanical Garden.

Milkweed plants provide perfect habitat for monarch butterflies as they complete a multigenerational migration each fall and spring, traveling thousands of miles to and from wintering grounds in Mexico. Milkweed provides both food and habitat for the beautiful insects, and causes the monarchs - so named because they are considered to be the "king" of the butterflies - to secrete a toxin that makes them poisonous to predators, such as birds.

However, the population of monarch butterflies making the massive journey has declined sharply. The Monarchs for Monarchs program is part of a nationwide initiative to help the butterfly population stabilize. It's especially important here, because Norfolk and ODU are right on one of three main flyways the butterflies take on their migration,

Marcus Jones, greenhouse conservator with the ODU Orchid Conservatory, said an important extension of the Monarchs for Monarchs program this fall will involve students with the Botany Club collecting seeds from all 10 to 12 species of milkweed native to Virginia.

"We started this process in the summer, collecting seeds from the milkweed species we planted on campus," Jones said. "As we grow and test each different species in plots around the campus, we can learn more about the interrelationship between the plants and the butterflies and other insect species."

Monarch butterflies typically are found in Norfolk throughout the summer and early fall. The butterflies that arrive here in the early summer are making their way back from their wintering grounds in Mexico. Monarch butterflies also leave and pass through the region during their fall migration south down the Atlantic Coast and west across the Gulf Coast.