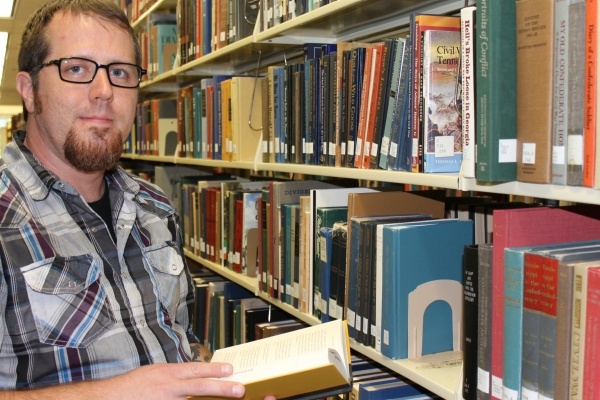 Old Dominion University Libraries' Bill Edwards-Bodmer will discuss an almost forgotten episode in local history in which two World War I German ships and their crews - on a respite from sinking allied merchant ships - became celebrities while held at the Norfolk Navy Yard at Portsmouth.

Edwards-Bodmer, a historian and reference specialist at ODU University Libraries, will tell the story in a panel presentation Thursday, Sept. 18. The talk is part of the National Maritime Historical Society's 10th Maritime Heritage Conference, being held at Nauticus and the Norfolk Marriott Waterside Sept. 17-21.

Edwards-Bodmer will appear as part of the panel "Hampton Roads under the Influence of War," moderated by Christopher Allen-Shinn of the Hampton Roads Naval Museum. Anna Gibson Holloway of The Mariners Museum, Matthew Eng of the Naval Historical Foundation and Corey Thornton of the Portsmouth Naval Shipyard Museum will also be panelists.

The discussion will be at 11:30 a.m. in Marriott Ballroom IV.

In the summer of 1915, before the United States entered World War I, the German Navy ships Kronprinz Wilhelm and Prinz Eitel Friedrich docked at the then-neutral Norfolk Navy Yard.

Edwards-Bodmer said the estimated 1,000 German sailors enjoyed vaunted popularity in America during the summer of 1915. "The sailors," he said, "became common sights in downtown Norfolk and Portsmouth, and at local beaches." The German officers "dined in the homes of local politicians and officials," he added.

Visitors came from great distances to see the quaint village the men built with salvaged materials - and to buy baked goods and keepsakes from the Germans who, for a time, enjoyed liberal leave policies. Even local businesses benefited from the surge of tourists.

Organized by the National Maritime Alliance, the Maritime Heritage Conference is supported by multiple organizations and institutions associated with maritime heritage, covering a wide range of topics. Museums, universities, government agencies and non-profit historical and heritage societies send representatives to share with and learn from one another.

For more about the conference, see HERE.