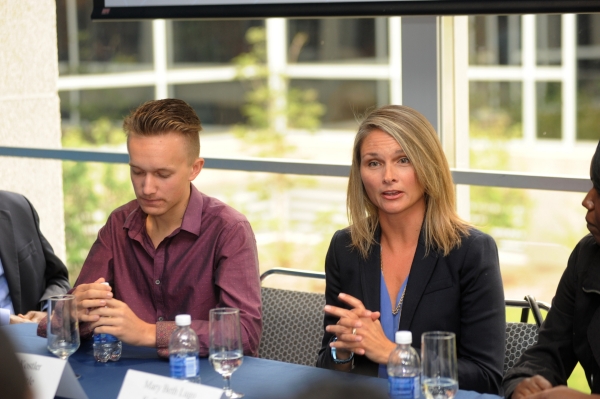 Their experiences launching businesses are vastly different. But one thing unifies the participants in the Entrepreneurial Panel hosted by Old Dominion University on Tuesday - passion.

"You have to live your idea. You have to eat it, sleep it, dream it - spend every second you can on it," said Michael Glenn, president of the real estate redevelopment business Luna Development Services.

Glenn was one of four panelists who spoke to a capacity lunch-time crowd in the ODU's Webb University Center. All four of the panel participants have the experience of starting a business.

"All four people at this table did things we wish we could do ourselves," said moderator Bob Batcher of the city of Norfolk, in introducing the panelists.

Two of the participants, Mary Beth Lugo and Carter Kostler, had the one-of-a-kind experience of presenting their idea on the ABC television show "Shark Tank."

"It really is how it seems on TV," said Lugo, who struck a deal with one of the Sharks for her KaZAM balance bike, which she said helped her son learn how to ride a bicycle while he was still in diapers.

Kostler was a panelist who is younger than the students who came to see him speak. Kostler was 15 when he appeared on "Shark Tank," actually turning down an aggressive deal from one of the Sharks to keep total control of his water and fruit juice bottle company Define Bottle.

"Shark Tank is really unique," Kostler said. "The whole process is prepping, preparing, and you can get cut from the show at any time. The whole time you're on edge."

The crowd of 80 students asked questions to the local entrepreneurs about their experience taking an idea into a business, inquiring about the help (or hindrance) from government, mentors, employees and other issues involved with starting a business.

Leslie Crews, who started Kombuchick, a beverage catering business, said her "party girl" ways forced her to find a substitute beverage for alcohol. The popularity of her new tea beverage choice convinced her there was a market to sell it commercially. To turn that idea into a business, Crews relied on expertise wherever she could find it. "Sometimes it helps to rely on the experience of others."

After the hour-long panel ended, the visitors to ODU were mobbed by aspiring student entrepreneurs, eager to ask for advice from people who had taken that bold step from idea to business.

That empowerment of entrepreneurs is something that Old Dominion University is hoping to inspire through the creation of the Strome Entrepreneurial Center. Funded largely through an $11 million donation from Mark and Tammy Strome, the center is designed to be the hub of entrepreneurial activity on campus, which includes academic curricula and support for student entrepreneurs.

The Strome Entrepreneurial Center will be dedicated at a ceremony on Thursday, Sept. 26.