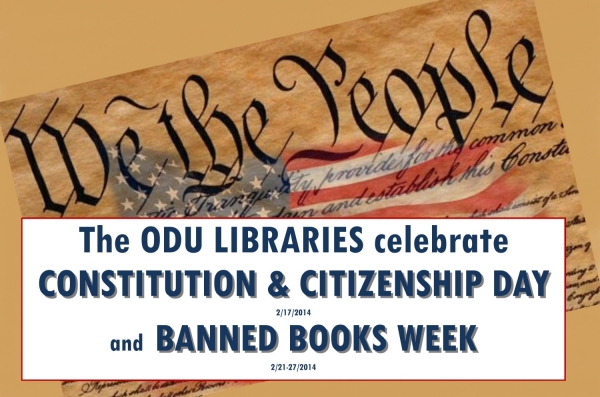 The popular "Harry Potter" fantasy series shares a controversial commonality with American literary classics "The Bluest Eye," "Slaughterhouse-Five," and "Huckleberry Finn" that may not be readily apparent. These titles are four of the most frequently banned books from U.S. public schools and libraries.

To draw attention to the issue of censorship and banned books, the Old Dominion University College of Arts and Letters and University Libraries will present two events on Sept. 23 in conjunction with Constitution and Citizenship Day and Banned Books Week.

Both of the following events will be held at the Patricia W. and J. Douglas Perry Library and are free and open to the public:

While images of book burnings seem like distant history, even in 2014 hundreds of book titles are still challenged each year, and often banned, in public schools and libraries. Panelists will explore: Who can challenge a book? How does a book's popularity affect challenges? Where does intellectual freedom end and censorship begin? What does the First Amendment's free expression clause really mean?

Defonzo will discuss the most notorious case of book burning in public schools: "Slaughterhouse-Five" at Drake High School; the fine line between intellectual freedom and censorship; the relationship between the First Amendment and parents that have final say in what minor children read; who can challenge and their top reasons; the top 10 books challenged in the past year; and the positive impact of reading banned books.

Other panel topics will include:

"With books like 'Harry Potter,' 'The Bluest Eye,' 'Slaughterhouse-Five' and 'Huckleberry Finn' still dominating the most challenged charts, we must consider the potential consequences of removing such texts from curriculum," Defonzo said. "When books are banned from public schools, and their libraries, we are withdrawing access to these materials, which in turn, compromises our children's' reading comprehension, retention and critical thinking skills as well as the social and cultural lessons these books teach them."