A Glimpse Into Old Dominion's Past Found in Webb Center 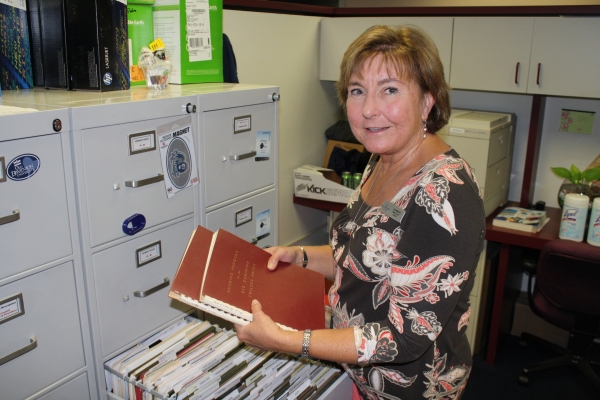 An old filing cabinet provided an unexpected glimpse into this school's early days, when what would become Webb University Center was still an idea being considered by a growing Old Dominion College.

Webb Center Director Sue Mitchell stumbled across two bound books in a filing cabinet outside her office when looking for other information about the building's construction. "They had been in there for more than 20 years, and I didn't even see them."

The two bound books contained a wonderful treasure for Mitchell, who has worked at Webb Center since 1991. "I'm not kidding you, when I found this I got tears in my eyes," Mitchell said.

The bound documents, dated May 1963, outlined a building and program plan for the student union building (now known as Webb Center). The two reports were prepared for Old Dominion College President Louis Webb by Porter Butts, known as the chronicler of modern student union concept.

In more than 40 years as director of the Memorial Union at the University of Wisconsin, Butts lived his passion for student unions - which comprise both the physical gathering place for students on a college or university campus, and the programming run through it.

The model that Butts created in Wisconsin was spun off at universities and colleges across the country, including Old Dominion. And the amazing thing, when reading through the yellowed documents, was how so much of Butts' advice to President Webb is still being used at ODU today, Mitchell said.

"The idea of activity hour (the twice-weekly gatherings in Webb Center's common areas) is right there in the pages of these books, even how to implement it and why," Mitchell said. "I spent last Friday afternoon reading both from cover to cover and find that 99 percent of what he said is still true today. It is amazing. Honest to gosh, I feel like I have the Holy Grail in my office."

Mitchell comes by her passion for student life honestly. Butts' ground-breaking book, "The College Union Idea," covered the foundation of the first known American student union at the University of Wisconsin through the late 1960s, when he retired.

In 2012, Mitchell was one of seven university officials nationwide who collaborated on a second edition of Butts' seminal publication, running through the history of the student union idea from 1968 to present day.

"It's so funny, the whole time I was writing this book these things were in a file cabinet that I open all the time," Mitchell said.

Reading through the reports made it clear to Mitchell that Butts was a true visionary. Even the staged expansion of the building, constructing Webb Center to its current 180,000-square-foot size in three steps, was suggested by Butts in his report.

The paragraph of "fundamental guiding purpose" of the student center could be lifted and placed in the proposal for the new university center ODU has as part of its 20-year University Master Plan, she said.

"A student union or student center is where everything happens that is non-academic. It's the place to give people first-hand experiences with art, culture, equality, governance," Mitchell said. "College students get exposed to things in the college center that take them out of their comfort zone."

The precious documents about the university's past will be given to the University Archives. But even how the materials arrived at Old Dominion is a fascinating story, Mitchell said.

In a 1993 letter to ODU's "Director of Student Activities," Butts' widow, Mary Louise, mentioned she had found the documents and wanted to send them to ODU - and in the letter she politely requested $4, to cover the cost of postage.

"It's the perfect epilogue to this story," Mitchell said.