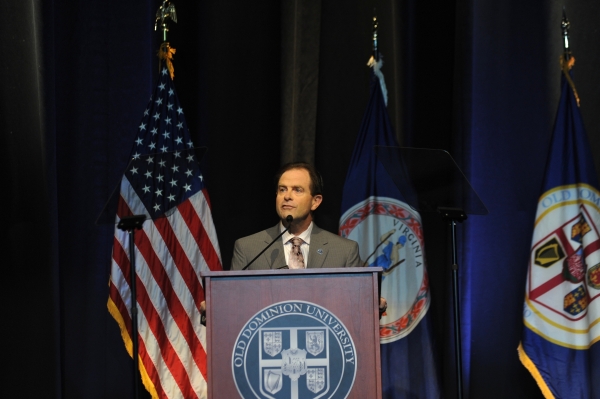 Broderick told a crowd of more than 1,000 at ODU's Ted Constant Convocation Center that he "marvels" at the across-the-spectrum achievements of the school.

"Old Dominion enrolls nearly 25,000 students from all 50 states and 127 countries," Broderick said. "We educate tomorrow's leaders - as evidenced by our 129,000 alumni who are forging new paths across the globe - and serve as a hub for groundbreaking research, innovation and economic growth."

With the start of the 2014-15 school year next week, Broderick used his annual address to highlight achievements in many fields, from faculty and student awards, to campus construction.

He said the achievements of the school are notable in a time of tight budgets and pressure on higher education institutions to be engines of growth, as well as centers of learning.

"A recent study by the Virginia Business Higher Education Council said the total economic value of ODU to the Commonwealth is more than $2.1 billion. We remain committed to being the engine that drives the Hampton Roads economy," Broderick said.

The president added that the school is on track to create a Center for Enterprise Innovation that will offer integrated services for existing and new businesses.

That initiative is part of the new strategic plan that will be presented to Old Dominion's Board of Visitors in September. "In the next five years, we will enhance our reputation for academic and research excellence by investing in programs that have demonstrated strength, considerable potential, or identified areas of critical national or regional need."

That leadership, as well as the dedicated work of faculty and administrators from across the university, has allowed ODU's recently created Mitigation and Adaptation Research Institute, led by oceanographer Hans-Peter Plag, to spearhead a national pilot project aimed at studying and mitigating the effects of sea level rise here in Hampton Roads.

"In June, we hosted 'Tech Surge,' a first-of-its-kind conference for government and industry planners to develop a comprehensive local strategy to combat increased flooding," Broderick said.

The president said that made the university the logical host for a bipartisan forum later that month featuring U.S. Sen. Tim Kaine and U.S. Reps. Scott Rigell, Bobby Scott and Rob Wittman, to promote action in mitigating and adapting to sea level rise. "The hard work of Military Affairs Director David Architzel and NOAA liaison Ray Toll has led to a significant expansion of Old Dominion's outreach in this area," Broderick said.

The President highlighted other achievements by ODU faculty in his 30-minute address, including the selection of Carolyn Rutledge, associate professor of nursing, as the university's 27th recipient of the Virginia Outstanding Faculty Award from the State Council of Higher Education.

Other honors singled out by President Broderick included the appointment of Steven Becker, professor of community and environmental health, to a National Academy of Sciences panel examining cancer risks in populations living near nuclear facilities; the participation of Gary Wagner, professor of economics and co-leader of ODU's Economic Forecasting Project, in a Federal Reserve Bank initiative that produces national economic forecasts; and the National Science Foundation bestowing a prestigious career development award to Sandeep Kumar, associate professor of civil and environmental engineering, for his groundbreaking work in algae biofuels.

"Clearly, our faculty is among the best in the nation. For our students, that translates into engaging and relevant learning opportunities that foster creativity, encourage independence and teach critical thinking skills," Broderick said.

Backed by accomplished faculty, ODU's students are achieving milestones at an ever-greater rate. Broderick said the six Outstanding College Scholar recipients from the spring commencement are a great example of the diverse talent among the university student body.

"These achievers included an international student, a returning adult, an ROTC midshipman and someone who graduated in less than four years," Broderick said.

Recent faculty additions have lowered Old Dominion's faculty-student ratio from 21-1 to 20-1, with an ultimate goal of 17-1.

In the next five years, the strategic plan calls for limited enrollment growth, but positions ODU to improve first-year retention rate to 83 percent, and graduation rate to 60 percent. To help accomplish this, one of the university's philanthropic goals is to increase financial aid funding by $2.5 million, and strive to raise an additional $350 million in new public and private resources during the period of the strategic plan.

The president said the university, as a diverse community of learners, will also promote its high-quality distance learning programs to a broader audience. It's because of the varied nature of backgrounds of its student body that Broderick said he was pleased to join 50 other presidents of Virginia's public and private institutions "to express our concerns about the proposed higher education rating system, and its linkage of the rating system to the award of federal student aid.

"While I fully support the transparency of data concerning our institution, I feel that linking aid to the proposed new rating system will disadvantage many of our students with limited means."

President Broderick spoke about many exciting initiatives in the year ahead, such as the formal dedication of the Strome Entrepreneurial Center in September, made possible through an $11 million donation by alumnus Mark Strome and his wife Tammy to support the creation of a campus-wide entrepreneurial ecosystem.

Morris Foster was introduced to the audience as ODU's new vice president for research. President Broderick said Foster is charged with raising the university's research profile, and working with faculty to develop a comprehensive review process for the school's enterprise centers.

New entities on campus include the Military Connection Center, created "so our 5,000 military-affiliated students could navigate the resources available to them," Broderick said. The fall semester will also see the opening at the Virginia Beach Higher Education Center of ODU's new College of Continuing Education and Professional Studies, to be led by Founding Dean James Shaeffer.

"It will offer professional development training and will cater to the needs of nontraditional and adult learners," Broderick said.

This fall will also see the start of construction on the new education building on the corner of 43rd Street and Hampton Boulevard, and the university's first freestanding dining hall, adjacent to 49th Street.

"In the coming year, we will push for capital funding for a new $70 million science building and expanded health sciences facilities, a testament to our leadership as the second-largest producer of STEM-H graduates in the state," Broderick said.

In closing, Broderick mentioned that in 1905, another college president, Woodrow Wilson, spoke of the need for education at Princeton University to be linked with patriotism, science, commerce and citizenship of the world.