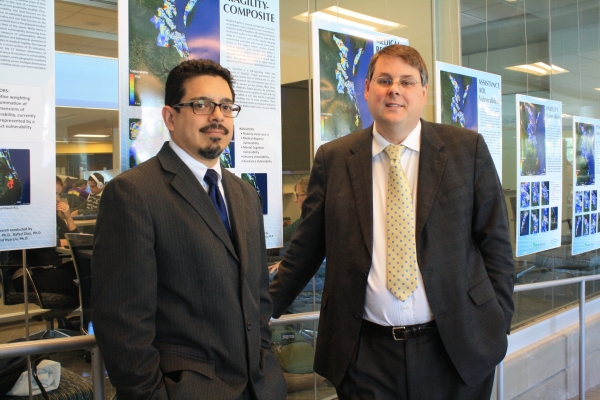 Standards that govern modeling and simulation research and development reflect a balance among government and industry interests and the protection of intellectual property.

Two faculty members at Old Dominion University's Virginia Modeling, Analysis and Simulation Center (VMASC) have recently published a paper in the prestigious academic journal Simulation. The authors found that modeling and simulation standards are important to our nation's competiveness and economic growth.

Not as well known, however, are the processes by which standards are generated and adopted. These may be subject to various competitive business and societal general welfare tensions.

The paper, titled, "Modeling and simulation standards development, adoption and conformity in the attainment of system values: a framework for the tension between two process ideas," is authored by Joshua Behr and Rafael Diaz, both research associate professors at VMASC.

"M&S standards are constantly being written, refined and discarded as technology and ingenuity evolves," Behr said. "Asking who generates these standards - who creates them, who participate in the processes - is important because poorly written or non-relevant standards have enormous implications for our industries.

"Through some dynamic interaction among self-interest, enlightened governance and government intervention the market endorses the standardization of particular technologies and approaches."

Diaz said the drive to innovate is a wonderfully human characteristic. "At any given time, the innovative and collaborative energies within a free market will engender a proverbial stew of borrowed and re-engineered technologies in combination with new technological innovation. All this activity takes place within the context of standards put forth by our professional associations," he said.

Surprisingly, while modeling and simulation is common in many industries and fields, the study of these important processes is still being developed. There are many volunteers that participate in the standards generating process, out of a sense of obligation to the profession.

But there are also business, industry and government interests, too. "There's big money at stake in standards generation. What happens if your M&S innovation gets adopted as an industry-wide standard? A particular interest may strategically increase market share or even dominate a technology, thus squeezing out competitors," Diaz said.

"The freedom to create, own and financially exploit new, emerging technologies through the concept of intellectual property encourages technological innovation that drives economies, and this understanding is part and parcel of the positive business synergy found throughout American's history," Behr added.

The paper, published earlier this year, looks at the pull and tug between the competitive and altruistic pressures that can buffet the standards-generation process. The need for national standards development makes determining the appropriate balance between public service and private sector interests of essential importance to our nation.

The authors found that as increasingly complex problems are explored by modeling and simulation, the standards required to facilitate the communication and exchange of information among several models into a functioning, integrated whole is an obvious need. However, the most efficient and appropriate standard may not necessarily be achieved by a top-down regulatory process, the authors assert.

Behr points out that although the development of standards is complex and difficult, there is something socially organic about the process: "It is beautiful," Behr noted, "somehow out of this jumbled process of individual, corporate and governmental interests arises a prescient hidden hand that draws out of the fragmentation and self-interest of the marketplace an emergent set of standards that, over time, contribute to our scientific achievement, efficiency, competitive advantage and wealth for the United States."