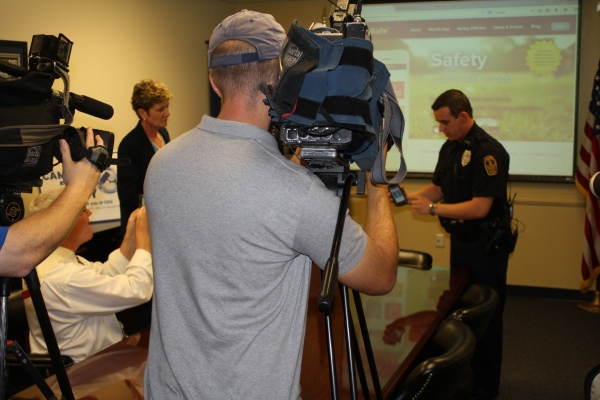 Old Dominion University Police Chief Rhonda Harris conducted a media demonstration Friday morning of LiveSafe, an innovative new mobile app that broadens the ability of students, faculty and staff to contact police, or receive information from law enforcement, in the event of an emergency on or near campus.

Harris and two other officers of the ODU Police Department conducted a LiveSafe demonstration at ODU Police headquarters on Monarch Way, showing local reporters how the new technology - developed by a survivor of the 2007 Virginia Tech tragedy - is used to share more information with police.

"What we want to see is more people calling the police. That's what we operate on - information," Harris told reporters.

More than 200 people signed up for the LiveSafe app in the first 24 hours after it was made available to the ODU campus community. Other university campuses who have adopted similar technology have seen a 10-fold increase in tips received by police, Harris said.

"This is really something that I think is going to take off on campus," she added.

During the press event, Officer Christopher Wood demonstrated how the free app works, and different scenarios where it can provide a layer of safety to students and other members of the campus community.

Wood stressed that a key component of the new technology is that every time a tip is submitted to police through the LiveSafe app, the user's GPS location is transmitted, and continually updated, so police can respond rapidly if needed.

The LiveSafe app is available for free download on iPhone and Android-based devices through iTunes or Google Play. It allows users to report tips or incidents to police anonymously, receive safety alerts from authorities and view interactive digital maps of the ODU campus and surrounding neighborhoods. A SafeWalk function allows users to share their location with friends and chat in text with them as they make their way to a destination and includes a panic button for immediate communication with police if a threat is encountered.

Adoption of the LiveSafe app is part of a broader educational initiative at ODU that seeks to promote a culture of safety and responsible citizenship. The initiative also involves significant investments in enhancements intended to promote a safe environment for students who live on campus or in nearby neighborhoods, as well as faculty, staff and administrators.

Through a slate of state-of-the-art technology and homegrown initiatives, ODU is adding multiple layers of protection to its existing safety plan that will further provide for the well-being of students, faculty and staff as well as the other valued members of our campus community.

So far this year, Old Dominion's safety enhancements have included:

To learn more about the many safety-enhancing initiatives that are active on campus, or for tips and other recommendations for living, studying and working at ODU, visit the university's new LIVING SAFELY WEBSITE.