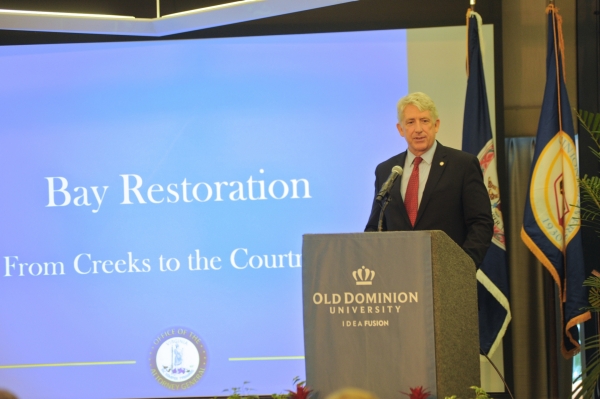 Herring's lecture: Bay Restoration, From Creeks to the Courtroom

Blue Planet lectures are a production of the Cheasapeake Bay Foundation (CBF), an organization that has led efforts to improve the health of bay ecosystems. ODU partnered with CBF to present Herring's talk.

Herring, a Democrat who is in his first year in office, has already taken action designed to make bay restoration a high-priority goal for the state. This spring he filed an amicus brief in a federal courts case, defending the right of the EPA to take a more active role in Chesapeake Bay cleanup efforts of Virginia and other states in the bay watershed.

The court case involves a "states' right" challenge to limit the EPA's authority to influence the environmental plans of individual states. The plaintiffs are farming and industry organizations, as well as the attorneys general of 21 states. None of these plaintiff states are on the bay, but Herring said they "feel threatened."

Herring said Virginia has long benefitted from "cooperative federalism" to help limit pollutants and sediments that foul the bay and adversely affect the health of its ecosystems. "As a whole, we're doing well. But we still have some hard work to do," he added. The best way to continue the bay cleanup, he said, is through cooperation with the EPA.

His amicus brief is a "clear articulation of the importance of the bay to Virginia," Herring said, and is influenced by language in the Constitution of Virginia. Article XI of the constitution states: "It shall be the policy of the Commonwealth to conserve, develop and utilize its natural resources, its public lands and its historical sites and buildings."

Herring believes his actions so far in office prove that environmental stewardship is important to Virginians, and that "we take seriously our responsibility to pass on to the next generation the bounty we have inherited."