ODU Monarchs Football Opener to be Available in 55 Million Homes 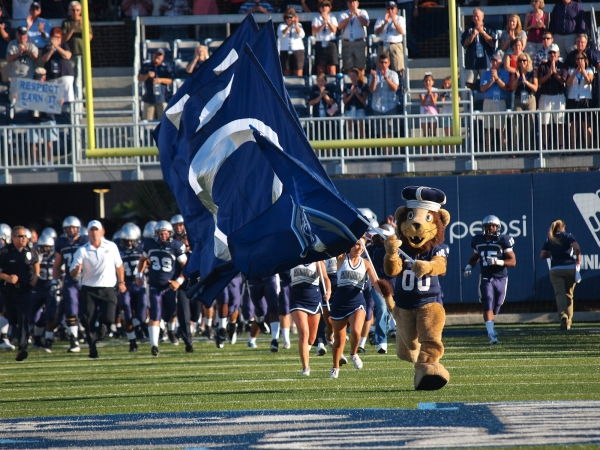 Saturday's 2014 season-opening game for the Old Dominion University football team against Hampton University will be available via television to 55 million homes around the country on the brand-new American Sports Network.

The broadcast will kick off football programming on ASN at 3:30 on Saturday, Aug. 30, with Mike Gleason and Jim Donnan calling the game. The contest will mark ODU's 36th straight sellout at S.B. Ballard Stadium at Foreman Field.

This is the third meeting between the two schools with ODU holding a 3-0 record. ODU won a storm-shortened 45-7 contest over Hampton in 2012.

On radio, the game is available on ESPN Radio 94.1 FM in Hampton Roads, Sports FM 100.5 in Richmond, and WBRG 104.5 FM, 1050 AM in Lynchburg. Ted Alexander provides the radio play-by-play, with Andy Mashaw as color analyst, Rich Radford as sideline reporter and Rick Kiefner as pre-game host. Coverage starts one our prior to kickoff.

Some facts about the Monarchs:

ODU Head Coach Bobby Wilder is 46-14 in his five years in Norfolk. The former Maine offensive coordinator led ODU to FCS playoff berths in 2011 and 2012 along with a CAA Championship in 2012.

Eleven of 12 games will be televised this season, including the season opener Aug. 30 against Hampton. Four contests: vs. Hampton, at UTEP, vs. FIU and at FIU, will be broadcast by the Sinclair Broadcasting Group, which just signed a contract to televise Conference USA games. ODU's game against Middle Tennessee will be broadcast nationally on Fox Sports 1 Friday, Sept. 26 at 8 p.m. It is the first Friday night game in school history.

Antonio Vaughan and Zach Pascal are the top-two returning receivers this year. Vaughan caught 60 passes for 843 yards and nine touchdowns last season while Pascal had 41 receptions for 534 yards and six touchdowns.

ODU returns four of their top-five tacklers from a season ago in junior Fellonte Misher, 95 tackles, and senior captain, Andre Simmons, 78 tackles. The Monarchs also return No. 4 tackler in Richie Staton and No. 5 tackler in D.J. Simon.

For Monarch fans attending the game, tailgate lots open at 11:30 a.m., and close two hours after the game ends. The stadium gates open at 2 p.m. The game day sponsor is Liberty Tax, and fans are encouraged to wear blue as their game day color.

For ODU fans in select other markets, here are the channels where the game can be viewed on ASN.

For a complete list of what channel the game will be available in markets from coast to coast, Click here for your Fan Watch Guide!

MyTVZ, a Sinclair Broadcast Group station, will produce an extensive slate of live, local sporting events, including football, basketball, soccer and other sports beginning with this year's college football season. The initial launch will include more than 50 universities and colleges. The collegiate conferences represented on the network include Conference USA, the Colonial Athletic Association, Big South Conference, Southern Conference and Patriot League.