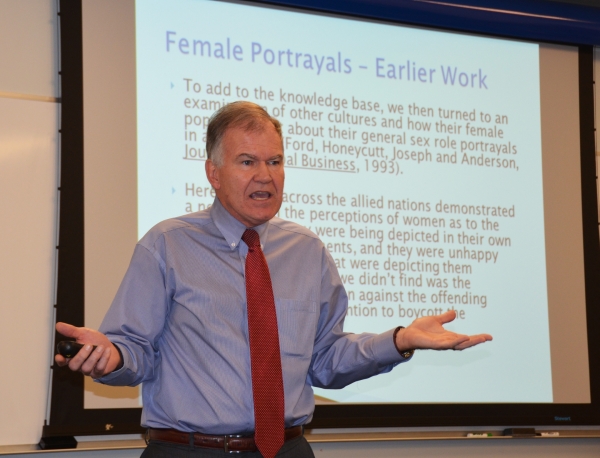 A new study published in the prestigious Journal of Advertising Research suggests that a combination of mathematical tools and experience-based techniques should be used to determine the most effective, flexible advertising budgets.

One of the study's authors is John Ford, Eminent Scholar and professor of marketing and international business at Old Dominion University's Strome College of Business.

In March, Ford attended the Great Minds Award luncheon sponsored by the Advertising Research Foundation in New York City, and was awarded - along with one of his past ODU doctoral students, Altaf Merchant, and two other colleagues -the Best Paper Award in Journal of Advertising Research for 2013.

At the same time, Ford was introduced as one of two executive editors for the Journal of Advertising Research. He will serve a three-year term.

"This is an exciting opportunity for me. I will be traveling to a number of national and international conferences to present my research while also serving on meet the editor panels to talk to potential authors about the journal."

Ford's recent paper "How Corporate Cultures Drive Advertising and Promotion Budgets: Best Practices Combine Heuristics and Algorithmic Tools," published July 11, suggests that the culture of an organization results in a pull and tug of advertising priorities.

"The results clearly showed that the greater the participation of the marketing personnel, the more likely algorithmic methods would be used to augment, but not totally replace, heuristic methods," the authors suggest.

In fact, the insertion of expertise from areas outside of the marketing department results in greater flexibility of advertising decision-making, even during the process. And the authors support their discussion with an analogy drawn from the great American pastime.

"What the baseball player will do is run toward the ball, constantly adjusting his speed to maintain as constant an angle as possible. A series of adjustments are made as the forward progress advances. The catch is made largely because of the outfielder responding to a series of heuristics," they wrote.

"It is the contention in this study that managers should think of heuristic budgetary processes in similar ways and have confidence in their value in conjunction with algorithmic techniques."

The paper is co-authored by Douglas West of King's College London and Paul W. Farris of the University of Virginia.