Math Video Is a Showcase for John Adam's Dry Humor 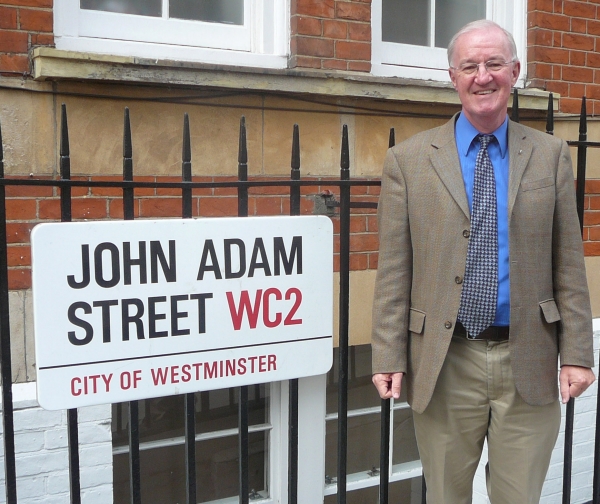 John Adam found himself on John Adam Street when he delivered the Royal Society talk in London. The street is named for a Scottish architect.

It is a stretch to compare Old Dominion University mathematician John Adam to comedian Peter Sellers, but when you view Adam's new YouTube video "Common Algebraic Errors," you just may think of the savant Chance the Gardener, the role Sellers plays in in the 1979 movie "Being There."

The fact that Adam, like Sellers, is English, and speaks with a pronounced accent, reinforces the comparison. But what really recalls Sellers/Chance is Adam's straight-faced delivery in the video of some very funny lines.

He begins the video with a sincere sounding thank-you to "the many students who have inadvertently contributed to this topic." The aim of the video, he says, is to help students see their algebraic errors from the instructor's point of view. "(This) will help you to avoid them, the errors that is, not the instructors. These are the kind of errors that can turn our hair gray and cause us to pull it out. You will see, I'm well on my way to completing this task."

During his three decades at Old Dominion, Adam has won international recognition for his research in mathematical modeling and mathematical biology involving tumor growth and wound healing. Recently, he has been interested in theoretical problems in meteorological optics. He is also the author of several books, such as his award-winning "Mathematics in Nature: Modeling Patterns in the Natural World" (2003).

The Royal Society for the Encouragement of Arts, Manufactures and Commerce invited him to London in 2012 to discuss his work. That same year he won the Carl B. Allendoerfer Award from the Mathematical Association of America for an expository paper he published exploring the principles that determine the structure of the human circulatory system.

But Adam's genius as a mathematician comes from more than brainpower. The twinkle in his eye, which seems to be ever present, and his knack for inserting droll asides into his conversations and lectures have helped to make him a beloved teacher. When he was awarded the Outstanding Faculty Award in 2007 by the State Council of Higher Education for Virginia, his citation was for both his research and his ability to make numbers interesting in his classroom lectures - as well as in the many talks he gives each year to clubs and organizations.

He mixed sturdy math with clever humor in two of his books, "Guesstimation: Solving the World's Problems on the Back of a Cocktail Napkin" (2008), which he wrote with ODU physicist Lawrence Weinstein, and "X and the City: Modeling Aspects of Urban Life" (2012).

So Adam was a logical choice to create the helpful, yet breezy ODU-sponsored "Common Algebraic Errors" video that has been posted on YouTube at a time when many thousands of students nationwide will be beginning fall semester math classes. At one point in the video, he gives a plug to the ODU Math and Science Resource Center, which has a shown over the past five years that tutoring can improve classroom performance in the College of Sciences.

The video moves through categories of common errors with labels such as "misuse/loss of parentheses," "improper distribution" and "ambiguous fractions."

But in the course of the instruction, Adam drops in conversations he imagines between studious young people: "So, Lisa, after we've worked through these trigonometric identities, do you think we could go back to your place and get into some nonlinear differential equations?"

Adam said in an interview that early reviews of his video seem to be consistent: "too stoic," "too stiff." And these were from his three children and a mathematics colleague. ODU Provost Carol Simpson did tell him by email that she thought his video was "terrific" and would be "extremely useful to high school students and new college students." But Simpson, who also has roots in the United Kingdom, noted that she is a fan of the "British sense of dryness," although others may not be.

"That was the point, really," Adam said. "Dry British humor, yes, without being as zany as I tend to be in the classroom, since it reflects on the university." Besides, he added hopefully, "it may be dry enough to go viral."