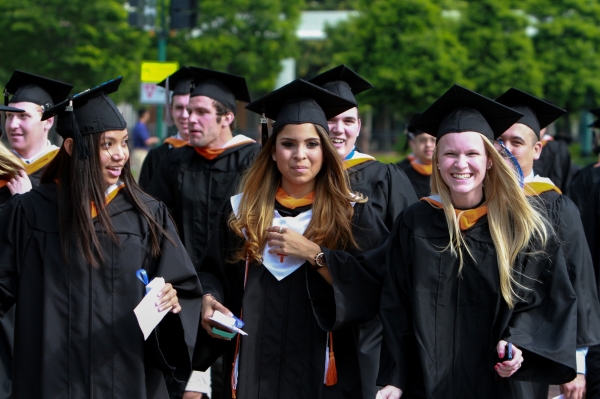 At the first of three Old Dominion University commencement ceremonies, held Friday afternoon, graduates of the College of Arts and Letters heard remarks from Nancy Kirkpatrick, a 1980 ODU graduate who serves as president of worldwide marketing for Summit Entertainment, a Lionsgate company.

Kirkpatrick has spent decades building a career at various Hollywood studios. Most recently she was responsible for marketing campaigns for blockbuster movies such as The Twilight Saga's "Ender's Game" and "The Hurt Locker," which won six 2009 Academy Awards, including Best Motion Picture.

Kirkpatrick shared how her time at ODU, during which she coached gymnastics and worked as a freelance writer, was "not the college experience you see in movies." She said she almost quit and "didn't have a clue" upon graduation about the skills and connections that would be needed in life - or so she thought at the time.

"Over the years, I've gradually learned how well my experiences at ODU - good, bad and somewhere in between - prepared me for different aspects in my life."

Ultimately, Kirkpatrick and her husband struck off for California with dreams of landing jobs at the 1984 Olympics and in the movie business, respectively. She credited writing samples developed during her time on the Mace & Crown newspaper staff for helping her land her first Hollywood job at Warner Bros.

Kirkpatrick initially thought it was part luck and part miracle that she got the job, and only in retrospect did she realize an "important truth."

"I was better prepared for my interview than I realized," she told the graduates at the Ted Constant Convocation Center. "The articles I had written at ODU gave me something the other candidates didn't have - writing examples and actual experience."

Kirkpatrick told the graduating students to be themselves, to find balance in their lives as they move forward into a world of careers and families, and to be nice to everyone.

"Maybe your life will be shaped by a class you've taken, a professor who has taught you or a friendship you've made. Perhaps your life will be influenced by some incident that seems trivial today but will grow in importance as the years go by," she said. "All you really know is that you've already embarked on a journey that will change your life forever. All you can bring to that journey is an open mind, a strong will and a compassionate heart.

At the Saturday morning commencement ceremony at the Constant Center, graduates of the Frank Batten College of Engineering and Technology, College of Health Sciences and College of Sciences heard remarks from John O. "Dubby" Wynne, retired president and chief executive officer of Landmark Communications Inc., a company that specializes in newspapers, broadcasting, cable programming and electronic publishing. Wynne played a key role in launching and building The Weather Channel.

After leaving Landmark, Wynne became chairman of the board of the Hampton Roads Community Foundation. He is a member of the board of trustees at Princeton University, as well as the school's annual giving chair. He is chairman of the advisory committee of the University of Virginia's Batten School of Leadership and Public Policy. Wynne is a founding member of the Hampton Roads Business Roundtable and serves as vice chairman on the state-appointed Council on Virginia's Future. He also is a member of the Executive Committee of the Virginia Business Higher Education Council.

In his address to the graduates, Wynne shared how most great leaders have a process for personal continuous improvement and how outstanding organizations have a similar process, called strategic planning.

"Too often, way too often, in my experience, people blow through life accepting whatever comes as inevitable, spending little time reflecting on choices and figuring out the right course of action," Wynne said.

He encouraged the graduates to continue with a deliberate, reflective thought process for improvement. He urged them to "periodically evaluate, reinforce and adjust those areas of your life which will have the greatest impact on your success, fulfillment and happiness."

Wynne advised the graduates to apply this improvement process to their individual lives in categories, including core values, strengths and weaknesses, careers, family and friends, personal habits and new learning. He further remarked that, over time, he added financial planning and service to others to his process.

Service to others says a "great deal about your character if you are willing to go beyond yourself and help others," Wynne said. "I hope all of you make service to others a lifetime priority. It is a very confirming experience and you will be enriched and respected for it."

In conclusion, Wynne said that those willing to get started on the personal continuous improvement process would be able to take more control of their lives. "You will definitely see positive results which otherwise would be random and far less frequent. Give it a try!"

At the Saturday afternoon ceremony, author and longtime children's advocate Alma Powell gave graduates of the Darden College of Education and College of Business and Public Administration "a few tips" to succeed now that they've reached this special day.

"These are things you've all known for a long time: play nice, learn to share, don't hit and don't hit back," Powell said. "We must be able to coexist and work together if we are able to make a shared future."

Powell, chair of the board of directors for America's Promise Alliance, told graduates that Americans are blessed to live in a country with a free press. "But with that free press, know that you are getting opinion," she said. "Search for your truth and form your own opinion of things."

In today's age of social media, Powell reminded graduates to "always, always think before you speak." That Instagram photograph of something inappropriate will exist forever, she said. "When you're 45 years old, and going for a job as president of your company, people will see that photo."

In closing, she quoted "that unconventional philosopher" Dr. Seuss, from the book "Oh, the Places You'll Go!"

"You have brains in your head. You have feet in your shoes. You can steer yourself any direction you choose. You're on your own. And you know what you know. And YOU are the one who'll decide where to go," Powell said.

As part of the Saturday afternoon ceremony, the university awarded honorary Doctor of Humane Letters degrees to Powell and Sidney O. Dewberry, chairman emeritus and founder of the engineering and architecture firm Dewberry. The late Samuel Coppage, who was an associate professor of information technology and university marshal at ODU, was recognized with a moment of silence at the start of the ceremony. He died earlier this year.