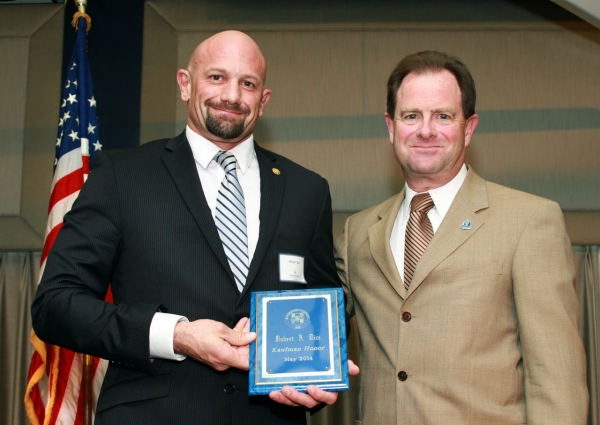 Robert Dice, a disabled veteran and Human Services graduate, received the Kaufman Prize, the highest honor given to a graduating Old Dominion University student, during the annual Student Honors and Awards Dinner on Thursday, May 9.

The Broderick-Evon Award, created by Old Dominion University President John R. Broderick and his wife, Kate, to recognize students who have given their time, knowledge and hearts to make the ODU community a better place was shared by two graduating seniors, Saige Hill and Benjamin Ipson.

Dice graduated from Old Dominion University with a 4.0 Grade Point Average, but before attending ODU, had a 25 year service career as a firefighter, paramedic and United States Navy Seal. Following his departure from the Navy, Dice worked for the U.S. State Department, providing presidential protection to President Hamid Karzai of Afghanistan.

While at Old Dominion, Dice has continued his service, serving as president of the Tau Upsilon Alpha Human Services Honor Society, volunteering at Seton Youth Shelters in Virginia Beach and serving as vice-chair of the Serenity on the Shore Committee. He also mentors 15 men struggling with substance abuse, who are obtaining treatment in Virginia Beach and Williamsburg. These experiences have solidified Dice's clinical and research interests in post-traumatic stress disorder, substance abuse and the Lesbian, Gay, Bisexual and Transgendered population.

Dice cited Tammi Milliken, associate professor of counseling and human services, as his most inspirational faculty member. "I admired Dr. Milliken's enthusiasm and ability to challenge her students. Her relentless work ethic and focus has constantly inspired me to do my best," Dice said.

As an expression of pride in the thousands of ODU students who have passionately given their time, knowledge and hearts to helping build the ODU community, the Broderick-Evon Award for Community Engagement and Service is of special significance to ODU's first family. It is named in honor of the mothers of John and Kate Broderick.

Creating the Broderick-Evon Award builds on the foundation for student success that has been a chief goal of Broderick's since he became ODU's eighth president in 2009. Through family donations, it guarantees a minimum $3,000 award each year to an ODU student, or students, who embodies the community spirit of Ellen Broderick and Joan Evon.