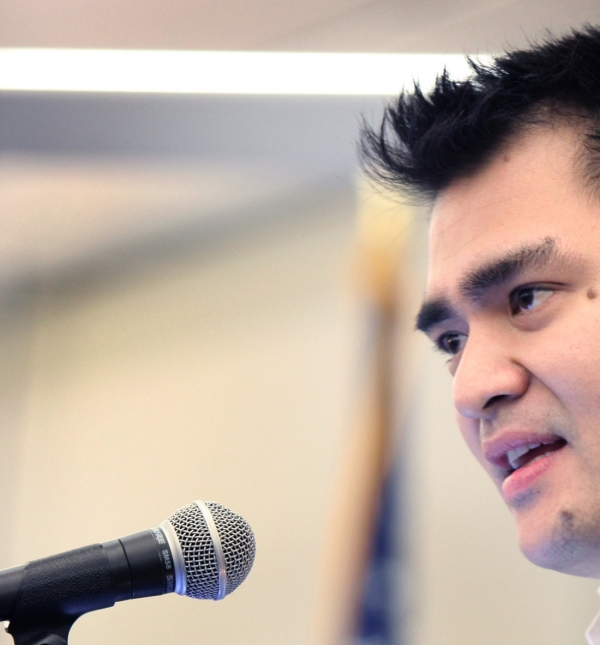 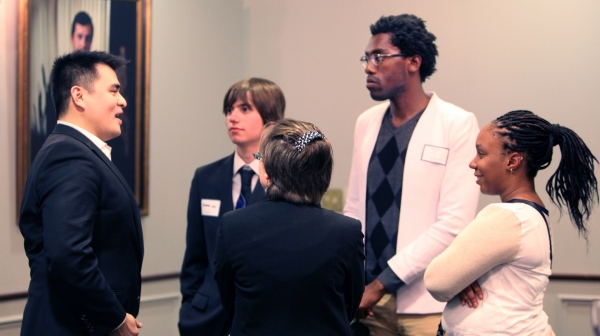 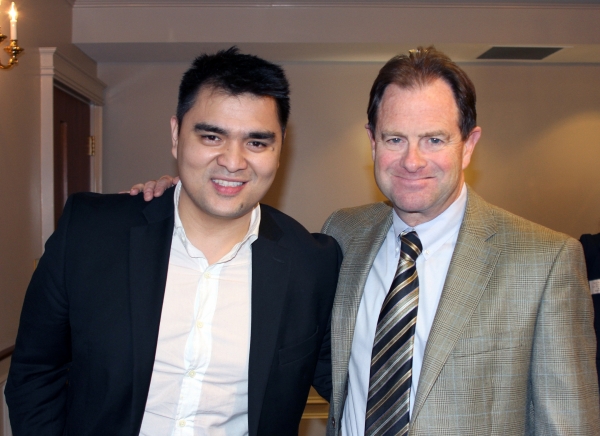 Jose Antonio Vargas, a Pulitzer Prize-winning journalist and undocumented immigrant, engaged a standing-room-only crowd at Old Dominion University Tuesday night with humor and unexpected insights from his personal experiences during a President's Lecture Series address that delved into the controversial issue of immigration reform.

Vargas - who was on a Washington Post reporting team that won a Pulitzer for its coverage of the 2007 massacre at Virginia Tech - gained international notoriety in 2011 when he revealed a long-kept personal secret in an essay for The New York Times Magazine, titled "My Life as an Undocumented Immigrant."

Vargas' appearance at ODU was the lead-off leg of a speaking tour that will take him to 20 cities in coming weeks. At the beginning of his lecture, he told the crowd of about 250 people that he is the "most privileged" among the 11-12 million undocumented immigrants currently in the United States, approximately 1,000 of whom are deported daily.

"Here I am flying around the country reminding people that immigration is much more complicated than the U.S./Mexico border," he said.

Vargas eased into the conversation by describing how his grandparents legally emigrated from the Philippines. After becoming a citizen, his grandfather, who was a Reagan Republican and ardent National Rifle Association supporter, changed his name to "Ted" after actor Ted Danson, who played bartender Sam Malone in the popular '80s television sitcom "Cheers." At age 12, Vargas was sent to live with his "Lolo and Lola" in Silicon Valley after his mother was denied a visa to enter the country.

Vargas said he was left thinking to himself: "Where does this chubby Asian kid with a Latino-sounding name fit in?"

He then told the audience how he initially believed the national anthem included the line "Oh Jose can you see?" This prompted him to conclude, "Oh my God, I just got here and they're so friendly!"

That line, and many others delivered during the more than hourlong presentation, was met with hearty laughter from the crowd. But Vargas' talk also was peppered with serious discussion about immigration-related issues and sobering accounts of the procedural limbo faced by many people seeking legal residency in the United States.

At the time of The New York Times Magazine revelation, Vargas, a native of the Philippines, had been in the United States for 18 years. He said after the article was published he expected to be deported, but nothing came of it.

"I was more shocked that nothing happened when I called ICE (U.S. Immigration and Customs Enforcement) myself because I wanted to write a Time (magazine) story about not being deported," he said, adding that the agency representative ultimately provided a "no comment" response. "You know we're here. You know you need us. You know you benefit from us. What do you want to do with us?"

Vargas' talk even elicited crowd participation at one point, when he asked audience members to stand if they thought undocumented immigrants should be allowed to have driver's licenses, like in California. Nearly everyone stood and Vargas used the opportunity to snap a photo with his cellphone's camera.

He suggested that civil rights and gay rights advocacy models could be used to address immigration issues, and urged the crowd to act, saying: "We can't afford for you all to be bystanders anymore."

He later added, "We have to take politics out of the situation. I, as a person, am not illegal. I am more than freaking papers."

"Documented," a film Vargas wrote, produced and directed, will air later this year on CNN. It chronicles his life as an undocumented immigrant and his crusade to reform the country's immigration laws. To view a trailer for the film, and other related videos produced by a nonprofit organization run by Vargas that seeks to elevate the conversation around immigration, visit the Define American YouTube channel.