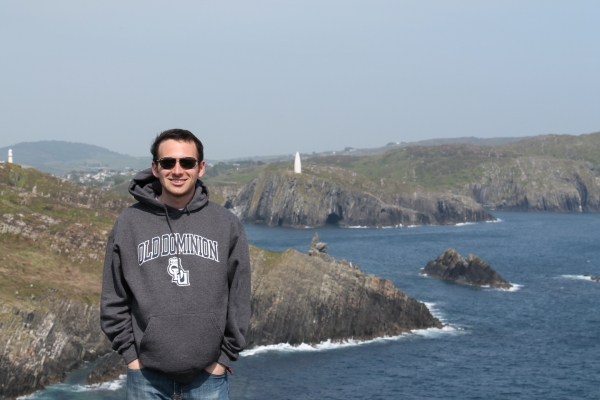 Like a lot of students who come to Old Dominion University to study engineering, Mark Levenstein thought he wanted to work at NASA Langley Research Center one day - on rockets or some other part of the space program.

But in his freshman year, the Chesapeake native was given opportunities to conduct research with Ali Beskok, former Batten Professor of Computational Engineering in ODU's Frank Batten College of Engineering and Technology.

Beskok's research specialty is microfluidics, the design and fabrication of tiny systems and devices through which small amounts of fluid are transmitted. A long way from rockets.

"I never really thought I would get the opportunities to go this route," Levenstein said. "But he was always there with his door open, so I got so involved in it, and was fortunate to get a number of opportunities."

He's made the most of them. Levenstein, a member of the ODU Honors College majoring in mechanical engineering, graduating in May, has been selected for a 2014-15 Fulbright U.S. Student Award for Research and Study at the University of Leeds, located in the city of Leeds, West Yorkshire, England. He was selected for the only award at Leeds for the 2014-15 school year.

"I always wanted to study abroad. When I got to ODU, I looked for as many different avenues as I could," Levenstein said.

In 2013, he received the Whitaker International Program's Undergraduate Award, which he used to conduct biomedical research while studying at the University of Leeds last spring. After that experience, Levenstein returned to the United States determined to get back there on a Fulbright research scholarship.

"It was a really grueling application process. It took eight months and I just found out," he said. But the multidisciplinary work being done at the University of Leeds in the field of biomimicry - applying nature's approach to the production of synthetic products - was immensely appealing to Levenstein.

"I'll be working with a mechanical engineer and a chemist, in that area between applied and pure science. It's very interdisciplinary, which is part of what appealed to me."

It's also nothing that Levenstein imagined doing when he enrolled at ODU. "Until I got here, I didn't know anything about what I'm doing now."

The university has given him many opportunities to try research, starting early in his academic career, Levenstein said.

"In everything I've done here at ODU, I feel like I've been supported and encouraged. Professors with totally different backgrounds have provided opportunities, helped me find research funding. I just feel really fortunate."

Levenstein leaves for England in August. While at the University of Leeds, he will be enrolled in the M.S. in Mechanical Engineering program, conducting research on biomineralization using a microfluidic device he created.

ODU's Office of International Programs (OIP), which advises on the Fulbright Program as well as many other international scholarship programs, encourages ODU students and young alumni to apply for a Fulbright Award.

The next Fulbright U.S. Student Award application period opens this May for the 2015-16 award year. OIP will host Fulbright information sessions starting in late April. Contact OIP at 683-4419 or http://www.odu.edu//intlprogs.