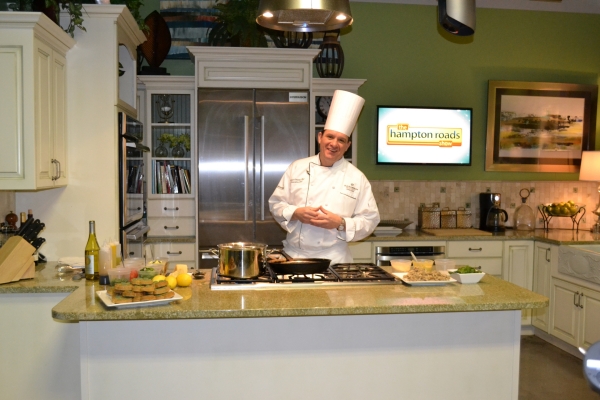 ODU Executive Chef Bob Patton on the set of "The Hampton Roads Show."

In fact, ODU is so proud of its culinary offerings that Executive Chef Bob Patton was a guest on "The Hampton Roads Show" Tuesday, cooking up a storm.

Patton prepared a baked Asiago chicken breast with fresh pasta on the live regional morning show, which airs on WAVY-TV. The dish contained fresh pasta made at Café 1201, the hub of residential dining in ODU's Webb Center. The pasta machine Patton used on the show was imported from Italy so Aramark/Monarch Dining could have more, fresher, preservative-free options for students.

"This dish is actually from the menu that we serve at Café 1201 on campus. We try to include a balance of tasty and healthy options on the menu to appeal to the varying tastes of our students," Patton said, in his debut television appearance.

Patton told the TV audience that Monarch Dining operates 20 different locations on the ODU campus, and that it also manages campus catering and concessions, including those offered at S.B. Ballard Stadium at Foreman Field and the Ted Constant Convocation Center.

You can see the broadcast featuring Patton at http://wavy.com/2014/02/18/baked-asiago-chicken-breast/.

Aramark employs a team of culinarians and registered dietitians to create innovative menu items that reflect how students eat on college campuses. The culinary team at ODU uses those items as a guide to customize the menu cycle for students at the university. Patton said Aramark/Monarch Dining is happy to be a partner with ODU during this exciting time of growth, rebuilding and transformation on the campus.

"The Hampton Roads Show" is the only locally produced lifestyles TV show in the region. It airs at 11 a.m. weekday mornings. See the show website at www.thehamptonroadsshow.com.