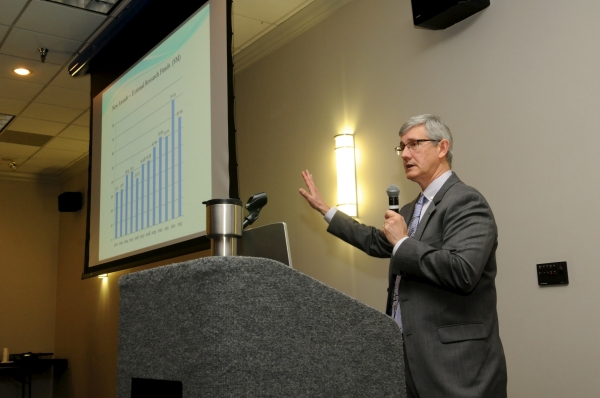 They are called F&A costs or, more typically, IDC.

Rodger Harvey, the interim vice president for research at Old Dominion University and chair of the Department of Ocean, Earth and Atmospheric Sciences, calls them "the cost of doing business for university research."

These facilities and administrative (F&A) costs - or, indirect costs (IDC) - are assessed by universities and other institutions on most research grants obtained by faculty and students.

Harvey acknowledges that the formula for the assessments can be confusing, and that is why he led a 90-minute presentation last week, sponsored by the ODU Office of Research, called a Faculty Forum on Indirect Costs. About 75 people attended.

This program was for investigators who want to know the difference between direct and indirect costs, what gets included in the facilities and administrative rate, if every grant gets charged indirect costs, how the university uses the money and how funds get distributed.

Although the federal approved rate of IDC recovery is 53 percent, ODU's actual rate of recovery is 24 percent, Harvey said. This is because some funding agencies cap IDC much lower than the federal agencies, some foundations and state programs do not allow IDC at all, and there may be other exclusions such as graduate student tuition.

Harvey dissected a typical $500,000 grant from a federal funding source to an ODU investigator, showing $326,797 going to direct costs received by the principal investigator and $173,203 going to IDC. Of those indirect costs, the largest chunk, about 35 percent off the top, goes to ODURF for grants management. The Office of Research, the deans and chairs of investigators, and the investigators themselves get IDC returns.

Much of the IDC that stays within the Office of Research and the ODU colleges is used to invest in equipment and other support for researchers recruited to the faculty and to promote research in general.

The external research funds that ODU has received during the past dozen years has been on a clear rise, with 2013 awards totaling $57.24 million. Total research and development expenditures, which include investments by ODU in its researchers' work, are also moving steadily higher, reaching $104.5 million in 2012.