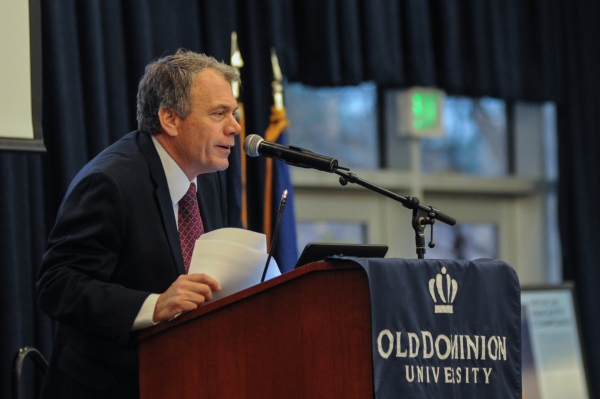 Participants from a wide range of emergency response agencies, academics, industry and local government convened at Old Dominion University for a day-long exercise designed to simulate the effects of sea level rise and climate change for participants' children, and grandchildren.

The tabletop exercise was led by the National Security Council, with support from the FEMA National Exercise Division, along with community partners who have roles, responsibilities or expertise relating to climate adaptation, hazard mitigation and resiliency planning efforts.

The process is part of a pilot project intended to serve as a model for communities in Virginia and across the country that are faced with sea level rise, extreme storm surge and recurrent flooding.

Ray Toll, Old Dominion University's director of coastal resilience research, said the University's multidisciplinary expertise at climate change and sea level rise mitigation makes it an idea "neutral" intermediary for stakeholders who will have a part in decisions made about the issue. The important thing is for the entire initiative to be nimble enough to adapt when circumstances change, "adjusting rudder as we steer course," Toll said.

Atkinson said the key facet about sea level rise is that it can be measured historically. Flood gauges at Sewell's Point have readings dating back to the 1920s, showing average water levels rising by more than a foot. Showing a graph indicating the number of hours per year Norfolk receives street flooding, Atkinson suggested that sea level rise is playing a role. "Something is going on, that much is certain," he said.

The lunchtime keynote speaker was Judge Alice Hill, senior advisor for preparedness and resilience at National Security Staff of the White House. In dramatic detail, Hill outlined the hard lessons learned from Superstorm Sandy in the New York area about how interconnected critical infrastructure can cause cascading problems during a major disaster event.

Sandy's 13-foot storm surge overwhelmed the defenses of lower Manhattan, knocking out power to much of the island, and filling one subway station with an incredible 80 feet of untreated seawater. Hill said community resilience is more than every individual making their own preparations. "It's asking, 'What can I do now to address future risk.'"

Hill stressed that the White House wants to empower communities to make their own decisions about mitigation strategies. "The federal government will support decisions made locally for mitigation against climate change," she said.

Joshua Behr, research professor of modeling and simulation with ODU's Virginia Modeling, Analysis and Simulation Center (VMASC), presented research he and colleague Rafael Diaz, VMASC research professor, have done into vulnerabilities that exist in communities due to a major disaster event.

Behr stressed that those vulnerabilities stretch far beyond physical risk from floodwaters, to include things like economic vulnerability, how close a family unit is to financial ruin from an event like Sandy and factors that affect a family's willingness to disobey mandatory evacuation orders, despite potential dire consequences.

"The pillars of Hampton Roads resiliency include reducing long-term vulnerability, fostering a "whole" approach to planning, and communicating risk to citizens," Behr said.

Old Dominion, the nation's hub of research for climate change and sea level rise, was a natural fit to host the exercise. In 2010, Old Dominion University President John R. Broderick established the Climate Change and Sea Level Rise Initiative to address these challenges through research and education.

The university facilitates the Hampton Roads Sea Level Rise Preparedness and Resilience Intergovernmental Planning Pilot Project national "whole of government" and "whole of community" organization that is currently developing a local strategy for sea level rise preparedness and resilience planning that can be used as a blueprint to combat increased flooding in other regions across the U.S.

This summer, the university also hosted a bipartisan forum - sponsored by Senator Tim Kaine and Congressmen Scott Rigell, Robert C. "Bobby" Scott and Rob Wittman - that promoted action in mitigating and adapting to sea level rise among all branches of government.

For more information on the Intergovernmental Planning Pilot Project, sea level rise and recurrent flooding, visit the Old Dominion University Center for Sea Level Rise WEBSITE. You can also see a livestream of tweets sent from the event at the official ODU Twitter page @ODUNow, or via the hashtag #sealevelrise.