The Buzz is Back, as a Full Constant Center Roots on Basketball Victory 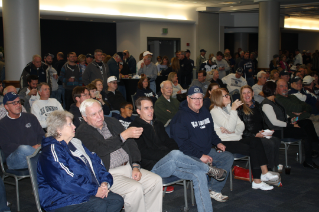 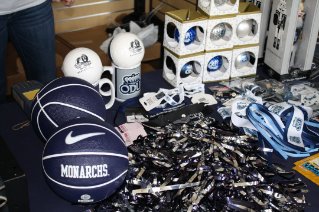 The buzz is back.

The Old Dominion University Monarchs men's basketball team hosted their traditional rivals Virginia Commonwealth University on Saturday, Nov. 29. And for one game at least, the Ted Constant Convocation Center was full and pulsing like it was during the school's basketball heydays.

However, a surprise 73-67 ODU win that wasn't as close as the final score indicated may help fill the Ted for the rest of this season. Most fans were decked out in ODU blue and silver, but a few thousand black-and-gold clad VCU Rams fans made for a lively environment.

The day started early for ODU fans. The Big Blue Room was full at noon, as fans watched on large television screens as ODU played its final football game of the season at Florida Atlantic University.

A roar went up in the room as quarterback Taylor Heinicke completed a touchdown pass just before halftime, to pull the Monarchs even at 21. But as the second half kicked off, fans made their way to their Constant Center seats, as basketball was the big attraction on this day.

"It's a big rivalry game no matter what, but throw in the fact that both teams are 4-1 and VCU is ranked in the top 25 and it brings it over the top," said Brittany Frey, an ODU student. Ilana Davlin, another ODU student was attending the rivalry game for the first time. "This is first time I've been to an ODU-VCU game since I've been a student here. Didn't realize how big it would be," Davlin said.

And the Monarchs responded in a big way, sprinting out to an 18-point lead, and holding on as the Rams tried to fight back.

"This is by far the best Virginia rivalry," said Max Bernstein, who describes himself as a long-time ODU fan. Though his rooting interest was different, a VCU fan named Josh wasn't going to miss this annual game. "I bought two sets of tickets to make sure I was going to able to get a seat," he said.

The Rams came to life at the end of the game, cutting the margin to six with 90 seconds to go. But Aaron Bacote drove the length of the floor for a layup to cause a joyous eruption among the Monarch faithful. Bacote was huge for the Monarchs on this day, scoring 31 points.

"This is a bigger upset than the American Revolution, and definitely more important," said ODU fan John Churchill, with a wee bit of exaggeration.

While not planning a new Mount Rushmore carving, ODU coach Jeff Jones agreed this was a big win for his team. "We have had big fan turnouts before, but this is a whole different ball game. It was great to give the fans a win," Jones said.

Now sitting at 5-1 and getting votes in the Associated Press Top 25 poll, the Monarchs look to build on their stunning early season success. And a passionate group of Monarch fans are ready to cheer every dribble and basket. Their next game is Wednesday, Dec. 3, against former conference rival George Mason.