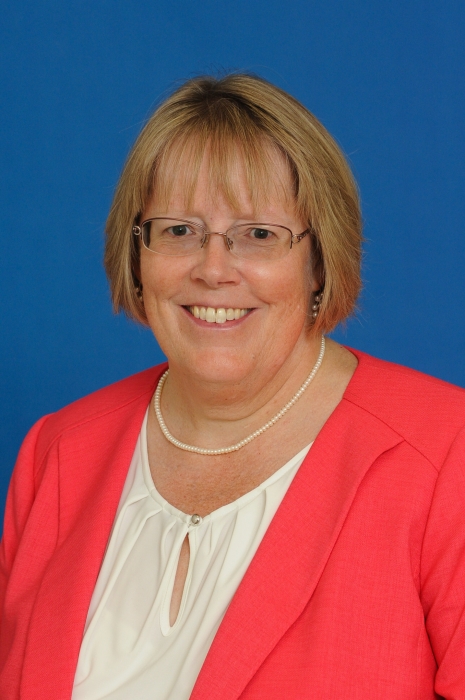 Gail Dodge, an Old Dominion University physics faculty member and a researcher at the Thomas Jefferson National Accelerator Facility in Newport News, will receive a 2015 Outstanding Faculty Award from the State Council of Higher Education for Virginia (SCHEV).

She is ODU's 28th winner of the award, which was inaugurated in 1986 and is co-sponsored by the Dominion Foundation.

SCHEV announced this week the 13 faculty members from throughout the state who will receive the 2015 award; each winner will get a plaque and $5,000 check at a luncheon in Richmond in February. The awards recognize excellence in teaching, research and service among the faculties of Virginia's public and private colleges and universities.

"I was thrilled to get the call from SCHEV informing me of the award," Dodge said. "I am so appreciative of the support I have had from my colleagues at ODU in putting my nomination forward."

A former chair of ODU's Department of Physics, Dodge is known not only for the experiments she conducts at the Jefferson Lab atom smashing accelerator, but also for the inspired teaching and outreach work she has done to makes physics an attractive major or career, especially for women and minorities.

"Given the importance of increasing the number of U.S. students pursuing technical careers, we must not accept the status quo in which women and minorities are underrepresented in physics and other STEM fields," Dodge wrote in a personal statement submitted with her Outstanding Faculty Award application. "For me, that means doing everything I can to mentor and encourage women in physics at ODU, including hosting women in physics dinners and taking an interest in the lives and dreams of all the students. My work as a scientist and teacher is also the work of a citizen who is concerned about helping the United States stay competitive in scientific education and innovation."

Outstanding Faculty Award nominees must possess a "record of superior accomplishment" that reflects their corresponding institution's mission and that encompasses four areas of scholarly endeavor: teaching, discovery, integration of knowledge and service.

At an awards luncheon on campus on Monday, Dec. 15, Dodge and six other ODU faculty members who were nominated by the university for the 2015 award will be recognized. The other nominees were:

Sheri Colberg-Ochs, exercise science, a global educator/author who has become one of the world's leading experts in diabetes and exercise

Annette Finley-Croswhite, history, an award winning teacher/author who specializes in the fragility of religious toleration, and in recent years has created a Holocaust education program at ODU

John Ford, marketing, another award-winning teacher and prolific researcher, known for his contributions to the field of international marketing

Richard Landers, psychology, a specialist in industrial/organizational psychology known for incorporating technology and social media in the classroom

Sylvain Marsillac, electrical engineering, a specialist in photovoltaics, he is a tireless and well-funded innovator in solar energy technology

Glen Sussman, political science, an award-winning teacher/author, his specialty in environmental policy has made him a prominent commentator on climate change issues.

Landers was nominated in the rising star category and the others were research/doctoral institution nominees.

During Dodge's tenure as chair of the Department of Physics (2005-11), she was instrumental in the establishment of ODU's Center for Accelerator Science, bringing together the faculty from physics, engineering, computer science and applied mathematics to develop the interdisciplinary curriculum for this new field that focuses on particle accelerators.

She also founded the ODU Physics Learning Center in 1998, which offers one-on-one instruction to help students in their rigorous studies.

Dodge's efforts have helped ODU to become a leader in the recruitment and retention of women in physics. In recent years, women have been one-third of the physics graduate students at ODU, which significantly exceeds the national average of about 20 percent.

In the broader physics community, Dodge has served a three-year term on the Nuclear Science Advisory Committee, which provides guidance to the National Science Foundation (NSF) and the U.S. Department of Energy concerning priorities and funding for the nation's nuclear physics research program. She also just finished a two-year term as an NSF program officer, helping to review nuclear physics grant proposals.

Experimental work in nuclear physics will be a high priority for her in the next few years. "Now back at ODU (from the NSF program officer position), I have plunged back into my research at Jefferson Lab, which is completing a $300 million upgrade of the accelerator beam energy," she wrote in her personal statement. "There are so many discoveries waiting to be made once we have the higher energy beam. In my case, I am interested in how the quarks orient themselves within the protons and neutrons that make up the nucleus."

In 2008, she was invited to the annual meeting of the American Association for the Advancement of Science in Boston to discuss her research at a symposium titled "Nuclear Physics: New Answers, New Questions About the Visible Universe."

Numerous former students were among those who contributed letters to Dodge's SCHEV award application.

"Dr. Dodge has a spark. She helped me learn much more than just formulas. She taught me how to think analytically. The gratitude I feel for her cannot be described in words," wrote undergraduate Carolina Toscano-Jara.

R. Mason Pennington, who is in medical school now in Richmond, wrote, "With Dr. Dodge's assistance, I was accepted into the Medical College of Virginia and received a full Navy Health Professions Scholarship. If I can emulate a fraction of her professional skill, endurance and fortitude, I am confident I will excel as a physician."

And Jixie Zhang, who has a Ph.D. in physics from ODU and was chosen for the prestigious Jefferson Lab Postdoctoral Program, added: "Without Gail's support and tutoring, I would not have this successful performance in my post doc position."

At the luncheon on Monday, Dec. 15, President John R. Broderick will recognize all of this year's ODU nominees for their outstanding work and present each with a plaque and an account of $500 to support their scholarship. Chandra de Silva, vice provost for faculty and program development, heads up the annual nomination process for the university.