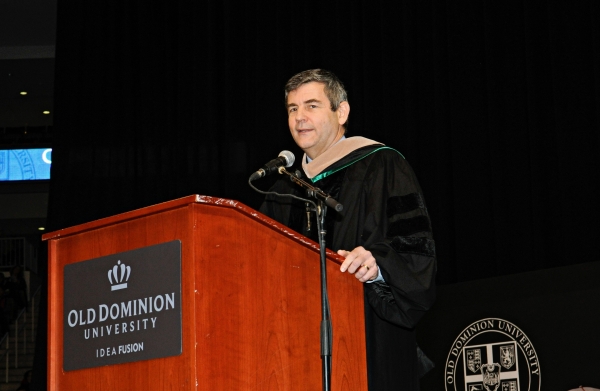 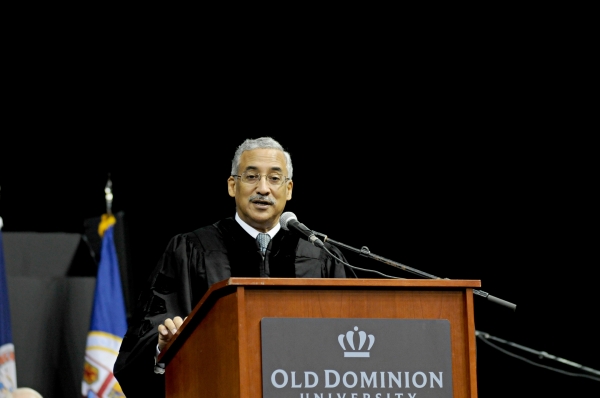 Temperatures were scarcely above freezing when soon-to-be graduates at the morning ceremony during Old Dominion University's 121st Commencement Exercises began their walk across campus, over the seal on Kaufman Mall, ending at the Ted Constant Convocation Center.

But the chill in the air was more than overcome by the warm feelings of more than 1,300 graduates of ODU's six colleges during the two ceremonies. Speakers gave graduates inspiring words about determination and choosing a career that will be exciting to wake up to every day.

Mike Petters, president and chief executive of Huntington Ingalls Industries, spoke to graduates of the Frank Batten College of Engineering and Technology, College of Sciences, and Darden College of Education at the morning ceremony.

Rep. Robert C. "Bobby" Scott (D-Newport News), currently serving his 11th term in the U.S. House of Representatives, gave commencement remarks to graduates of the College of Arts and Letters, College of Health Sciences and Strome College of Business at the afternoon ceremony.

Petters told graduates that they are giving their parents a great holiday gift with their achievement.

"What a clever way for you graduates to give your parents the most amazing gift ever, your college degree. I'm sure they are proud of you, and you should be proud of yourselves," Petters said.

Encouraging graduates to "chase the job, not the title," Petters said there are three questions job-seekers need to ask themselves about any chosen career.

"Will I have the opportunity to learn something new? Am I part of something bigger than myself? And am I excited to wake up every day and go to work? If you can say yes to all three of those questions, then every day will be a success, and titles and more responsibility will follow."

Noting that as president and CEO of a Fortune 500 company, it would be easy for graduates still looking for their first job to be skeptical of his words. However, Petters said he meets many ODU graduates at Huntington Ingalls, and regardless of their job title, they share one common trait.

"ODU plays a very big role in the success of Huntington Ingalls. There are 1,200 graduates of Old Dominion University working for us. We have more college grads from ODU than any other school," he said.

Petters told graduates about Julius Samonte, Vince Warren and Tammy Crouch, three Old Dominion University alumni who work in different jobs at the company, one from each of the colleges participating in the morning ceremony.

Petters asked each of them to give advice to 2014 graduates, and all three employees spoke on the themes of always learning, being part of something bigger, and being excited to go to work every day.

"I should tell you one last thing about Julius, Vince and Tammy. None of them remember who spoke at their graduation ceremonies," Petters said. "So even though you may not remember me as your commencement speaker in five, 10 or 20 years, I hope you will be able to recall my three questions.

"More importantly, I hope you will use your education, experience and determination in a way that enables you to respond to these three questions with an enthusiastic and resounding YES!"

Rep. Scott told graduates at the afternoon ceremony that while Commencement might be the conclusion of graduates' time at Old Dominion, "this is not a day of endings, but one of beginnings. This day will be one of the turning points in your lives. You are on the verge of becoming the next leaders of the 21st Century, and we are entrusting our future to you."

Scott said graduates know they have made tough choices to persevere and get their degree.

"But, your presence here today shows that you can follow through on commitments to yourself and to others. It also shows that you are dedicated to giving yourself new opportunities and maximizing your potential, as well as maximizing the contributions you can give back to your community," he said.

Scott, the ranking incoming Democratic member on the House Committee on Education and the Workforce, a committee that he said is working in a bipartisan manner to keep education affordable. Economically, the United States can't compete with other countries on wages or access to raw materials and markets. "No, the main reason that America remains strong and continues to attract business investment is because we have well educated workers," he said.

In concluding his remarks, Scott related the parable of a career homebuilder tasked with building one last house. Tired of his job, Scott said the homebuilder did shoddy work, only to be surprised with the keys to the house as a retirement present.

"Graduates, you now have the tools needed to do a good job, to start a promising career, to contribute to a greater America, to win the future. Now is the time to decide how you want to use those tools and what kind of house you want to build."

Also at the 2 p.m. ceremony, Susan Goode, a community leader and volunteer, will receive an Honorary Doctor of Humane Letters.

Goode has been actively involved in community, arts and historical affairs in Roanoke and Norfolk for more than 40 years. She is a retired schoolteacher and has also devoted her time and support throughout Virginia and nationally as a member of various nonprofit organizations.

She and husband, David R. Goode, retired chairman, president, and CEO of Norfolk Southern Corp., received the Governor's Arts Award in 2008 for their lifetime achievement and commitment to arts and culture.

Together, the Goodes made a generous gift to Old Dominion University in support of Arts in the Village in 2012, which led to the naming of the state-of-the-art Goode Theatre. They also established The David & Susan Goode Endowment for the Arts in 2008 for art programming and activities associated with the Gordon Self-Taught Art Collections and Gallery in ODU's University Village.