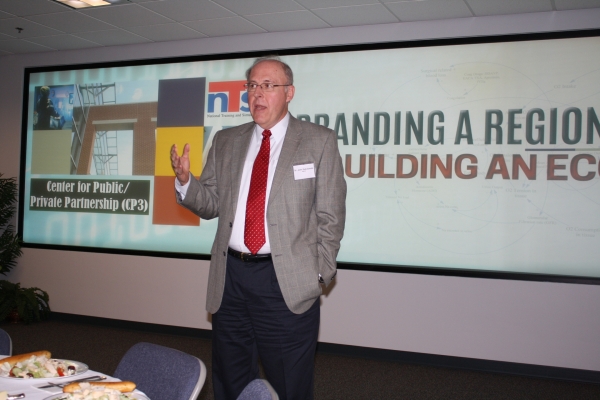 The results of a statewide study, due to be released publicly this month, but presented to an audience of civic and industry leaders at Old Dominion University's Virginia Modeling, Analysis and Simulation Center (VMASC), indicates just how important modeling and simulation (M&S) is to the economy of Virginia.

Linda Brent of the ASTA Group, which along with Hampton Roads-based MYMIC Inc. was tasked by former Virginia Gov. Bob McDonnell to do a statewide M&S study, told the audience at VMASC's "Branding a Region, Building an Economy" event Thursday, Nov. 13, that M&S has a direct economic impact on Virginia of as much as $60 billion annually.

"M&S is truly an economic driver for your state. And the future is very optimistic," said Brent, whose ASTA Group is based in Florida.

The comprehensive analysis of M&S in Virginia was done by analyzing data about various sectors where the discipline plays a key role, an analysis of the M&S workforce in Virginia, focus groups in each of 10 identified regions of the state, and an online survey distributed to stakeholders and organizations involved in M&S.

The full results of the Statewide M&S Study will be made available shortly on the Commonwealth of Virginia modeling and simulation website.

Brent said the focus on a transition from an M&S industry largely dependent on military subcontract work, to one that weaves through every sector of the economy, has resulted in a more coordinated approach in Virginia. Now there is much more collaboration across sectors, "which is really where M&S needs to be anyway," Brent said.

The focus for the next few years should be on the creation of a multidisciplinary workforce, and on creating a diverse marketplace for the discipline of M&S, Brent said.

That is the message John Sokolowski, the VMASC executive director, also espoused in an editorial published Nov. 9 in the Richmond Times-Dispatch. Sokolowski wrote that rather than being daunted by the breakup of U.S. Joint Forces Command three years ago, industry and academic leaders are using that as a call to innovate.

"Today, not only is M&S alive and well in Virginia, it is thriving. Modeling and simulation now plays a key role in all sectors of Virginia's economy - from federal labs, to the Port of Virginia, to health care and the military, to name just a few - and it promotes job creation and retention," Sokolowski wrote. See his full op-ed HERE.

At the "Branding a Region" event, Sokolowski told municipal government officials, military personnel and entrepreneurs that work by Joint Forces Command didn't created the predicted flurry of M&S start-up companies in Hampton Roads. Instead, he said M&S technology has been incorporated into the activities of a wide range of existing businesses in the region.

"The message I really want to get across to you is that modeling and simulation is alive and well in Virginia," Sokolowski said.

This is the second time local government leaders and M&S practitioners and users from academia and industry have come together, following a technology roundtable hosted as part of the 8th Annual Modsim World Conference in April.

The events are coordinated by VMASC, along with Center for Public, Private Partnership and the National Training and Simulation Association.

Founded 17 years ago, ODU's VMASC is one of the leading academic research centers for M&S on the East Coast. ODU is the only university in the country that offers a complete advanced education in the discipline of M&S, from undergraduate through to post-doctoral.