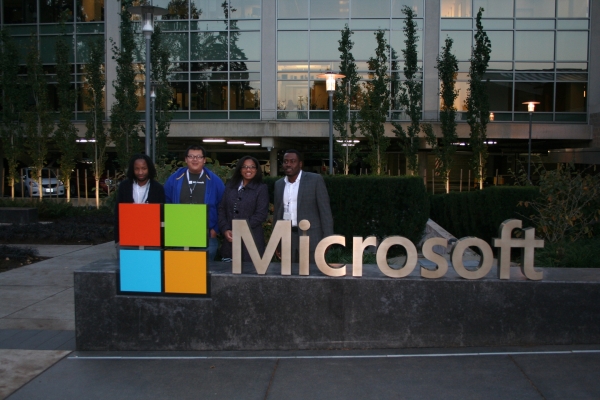 "We were happy with the entire experience. We tried to make the most of it," said Franck Tchouambou, a finance and decision sciences student originally from Heidelberg, Germany.

The UAF Hackathon challenged teams of minority student engineers to create an application that can provide societal benefit. The competition was inspired in part to fix the disparity in ethnic makeup of workers in computer fields. Less than one percent of the current workforce in Silicon Valley is Latino or African American.

To participate in the Nov. 12-14 finals of the UAF Hackathon, at Microsoft headquarters in Redmond, Wash., the Old Dominion team needed to survive two rounds of eliminations of project proposals. Although the ODU team did not win the final competition, members were proud to be one of only 12 teams selected to participate in the finals.

Tchouambou had previously developed an idea for a ride-sharing, textbook-selling marketplace called "CampusWise." The idea won a $15,000 accelerator grant from local business incubator Hatch, and was entered in a statewide entrepreneurial competition.

The new app itsDone builds on the concept. The student-developed itsDone app provides an opportunity for students to offer services such as tutoring, rides home and haircuts to other students at the institution. Setting it apart from other online service markets, itsDone would be housed under the email umbrella of the university; students would need a university email to access the service.

Mark Lane, associate professor of finance in the Strome College of Business, acted as the faculty coach of the student Hackathon team. Lane said he was proud of how the ODU competitors played by the rules (the Old Dominion presentation was one of the few that adhered to the guidelines) and used their time at Microsoft headquarters to learn as much as they could.

"They truly did a fantastic job. They should be very proud," Lane said.

Tchouambou said the ODU team members made a point of getting whatever they could from the experience, working in the large common area at the Microsoft Garage, sharing experiences with other competitors, even if it involved staying up until 5 a.m. writing software code for their app.

Now that they are back on campus, the student entrepreneurs are back at their regular "haunt" - the Strome Entrepreneurial Center. Tchouambou said he's there several times a week, working on business start-up ideas with like-minded students from across campus. He said he's thankful this service now exists for students at Old Dominion.

"This wasn't here at all when I arrived at ODU," he said. "The Strome Center feels like a start-up. Even the layout of the facility, with the open space and whiteboards, cultivates creativity. Before, if I wanted to work on a start-up idea, I needed to leave campus. Now I stay right here."

The United Athletes Foundation, founded by former NFL player Reggie Howard, is a 501c3 public non-profit organization created in 2008 by a group of professional athletes who understood their unique role in improving the lives of both the athlete fraternity and society in its entirety. To date, there are more than 150 professional athletes associated with the UA Foundation including members of the NFL, NBA, MLB, WNBA and professional boxing.