Small Children Were the Big Story at 2014 Pumpkin Drop 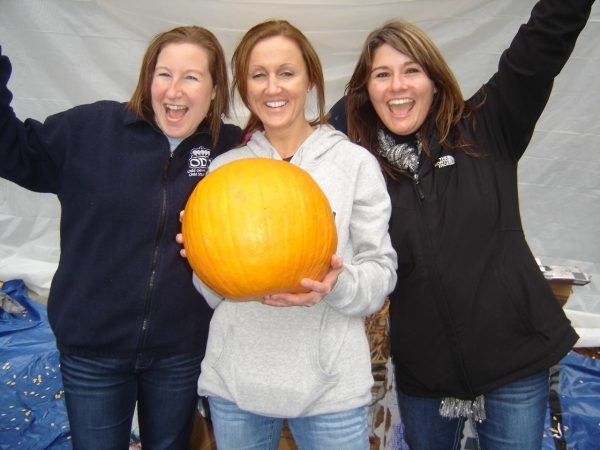 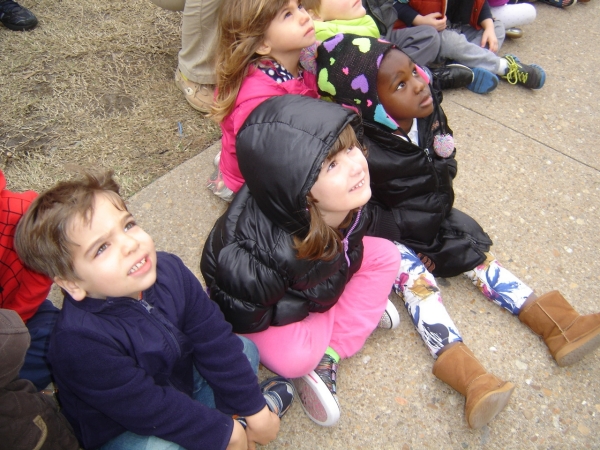 Chilldren from the Learning and Research Center anxiously await a pumpkin to be dropped into a catcher that they helped to design. 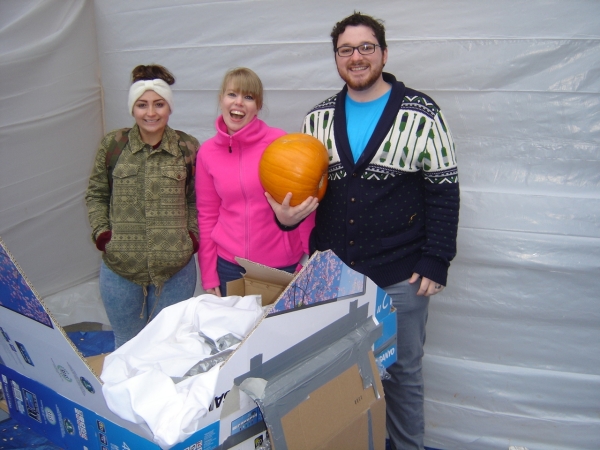 The big story at this year's Pumpkin Drop sponsored by the Old Dominion University Society of Physics Students (SPS) was the enthusiastic - and victorious - team of preschool competitors from ODU's Children's Learning and Research Center.

Four-year-old kids competing against college students may not sound fair, but a large cardboard box stuffed with pillows and foam that the preschoolers helped to design was one of the catchers that successfully "caught" a pumpkin dropped nine stories from atop the Batten Arts and Letters Building.

Christy Charlton of the Children's Learning and Research Center faculty said children from the center, which is just across the street from the BAL Building, have been attending the Pumpkin Drop for several years now. "This year we were thinking, 'Hey, we can do that. We can build one.' And we did," she explained.

Ashley Deutsch, one of Charlton's colleagues, said 62 different kids at the center contributed ideas and contents to the catcher, and that the teachers built interest and suspense by practicing catches using eggs.

The kids, and their teachers, cheered when the first pumpkin that had been dropped into their catcher was dug out and found to be unbroken.

Another successful catcher was entered by Team Casper (physics students Kathryn Starnes, Matt Johnson and Kayla Sidor), who said they spent about six hours designing and building a box filled with foam and a variety of balloons, some filled with shaving cream. A white sheet over top the catcher gave it a Casper the Ghost look.

Team Berry (physics students Moe Salem, Ryan Waldrop, Ryan Stanger and Kylie Hulett) was successful with a cardboard box stuffed with smaller boxes, airfoam and newspaper, and covered with cargo net. Their team name came from a manufacturer's name on the large outer box that the students used.

The annual Pumpkin Drop has become a popular autumn event on campus over the past two decades. Although the event is traditionally held close to Halloween, this year's Nov. 13 event came late enough into the fall semester to give creative students more time to design and build the pumpkin catchers that will be tested in the competition.

Mathieu Ehrhart, president of SPS, said he was amused when the Children's Learning and Research Center sent in the very first entry. "Then the entries kept coming, right up through last night, and we have 16, five more than last year. We're pumped by the turnout." He said physics faculty members Robert Michaels, Yelena Prok and Balsa Terzic were especially helpful in encouraging student participation in the competition.

Apart from the fun of watching pumpkins perilously plummet from nine stories high, the SPS made sure the audience also got lessons in the dissipation of the pumpkins' kinetic energy and other facets of physics. Past pumpkin catchers have ranged from simple buckets of mud to complicated counterweighted structures; straw, balloons and air mattresses are often used in the construction.