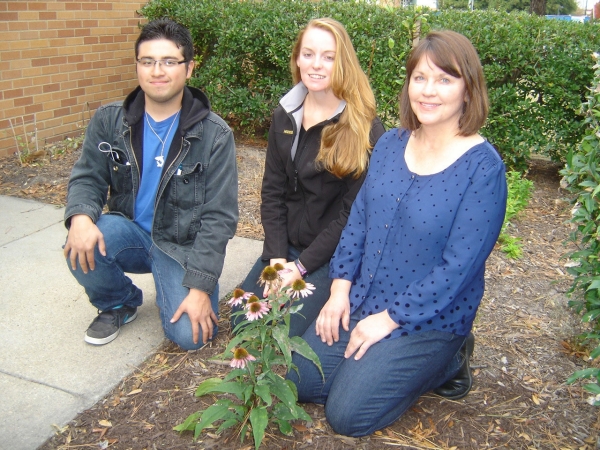 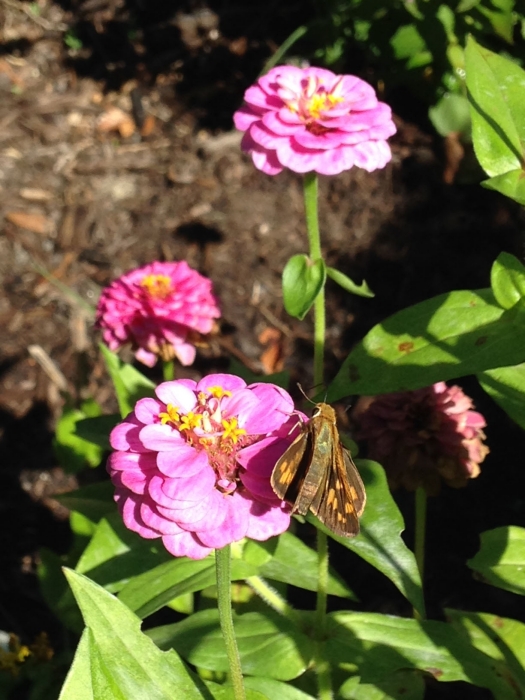 Look closely and you will see a skipper butterfly at a zinnia flower in the fire station garden. (Photo was taken several weeks ago by Associate Professor Lisa Horth.)

For the past five years, Old Dominion University biologist Lisa Horth has been spending a lot of time studying pollinators - in this case, bees and other insects that facilitate plant pollination and the production of fruits, vegetables, nuts and grains.

Horth's mantra through these years has been "give back to those who give." In other words, let's protect the pollinators, which provide us with such a valuable service.

The fact that colony collapse disorder has been shown to be cutting deeply into honeybee populations has only made her press harder with her research surveying other native bees and studying the possibility that pollinator diversity can improve production of crops such as strawberries. (Wind, birds and even some mammals also assist in pollination, which involves the transfer of pollen grains from the male anther to the female stigma.)

That mantra came to mean something else to Horth last year. One of her graduate students who was searching for pollinators ventured just off campus onto the lawn of the Norfolk Fire Department station at 43rd Street and Hampton Boulevard. Firefighters came out to chat, and they mentioned that they had wanted to plant a flower garden on the property, but had never found the time.

"It struck me that to give back to those who give could also apply to the firefighters, who serve us routinely," Horth said. "There was dualism in this that appealed to me."

Not long after that exchange with the firefighters, senior Meighan Wisswell agreed to start the student Conservation Biology Club and to be its founding president. Horth, adviser to the club, suggested that the members' first project could be to plant a garden at the fire station with plants specifically chosen to attract pollinators. Wisswell agreed and has been dedicated to the chore ever since, even though she graduated in May.

By October of this year, after well over 100 volunteer hours put in by ODU students - many of them by Wisswell, current Conservation Biology Club president Allison Roberts, and biology senior Haxley Gomez - the club had an approximately 10'x50' garden flanking the east side of the fire station. On a warm November afternoon this week, Horth, Wisswell and Gomez were at the garden to spruce it up and "tuck it in" for winter.

"Most of the plants are perennials and this garden will really be fantastic come spring," said Wisswell, who plans to begin a graduate program soon in conservation biology or environmental science, but now works as a tour guide for school children on the Elizabeth River Project's Learning Barge.

Horth and Wisswell said the firefighters at the station have been delighted as the garden took shape this summer, with a few plants purchased, but most scavenged from the gardens of members and friends or donated by area nurseries and Norfolk Botanical Garden.

"It has really improved the firefighters' view," Wisswell said, "and it showed them that there are people on our campus who care about them and appreciate all that they do. This is a very, very busy station."

In an email, Roberts added: "We have more work to do, and there is always maintenance, but considering we're a relatively new organization I think we have made good progress. I'm grateful to club members and officers who have put time in to this project, and look forward to working with them further."

There were no pollinators to be seen on this November afternoon. Horth, who conducts a pollinator research project at the Virginia Zoo about five miles from the ODU campus, said the pollinators in this region withdrew for the winter during a cold snap late in October. But during the summer and early fall, the garden's stewards counted all sorts of insects on pollination duty in the fire station garden, among them: honeybees, bumble bees, thread-waisted wasps, monarch butterflies, fritillary butterflies, skipper butterflies and various moths.

A few plants in the garden such as mums and pansies are there only for color, but most also have the sweet nectar that attracts pollinating insects. The garden has coreopsis, coneflowers, golden rod, salvia, blanket flowers, butterfly weed, yarrow, sedum, wandering jew, Confederate jasmine, zinnia and even the beginnings of a strawberry patch.

Also on and around the ODU campus this year, Horth's colleague in the Department of Biological Sciences, lecturer Tatyana Lobova, has led a "Monarch for Monarchs" project that has created milkweed gardens to help attract monarch butterflies. Lobova is also director of science at Norfolk Botanical Garden (NBG), and this project has been in collaboration with NBG.