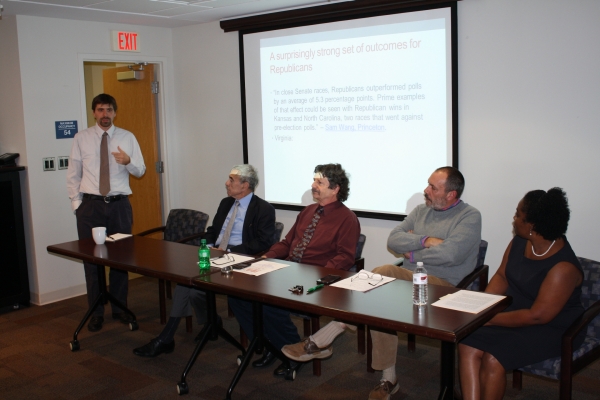 After a midterm election which saw a surprisingly dominant performance by the Republican Party, a panel of Old Dominion University political scientists tried to put the events of Election Day in perspective.

The panel, hosted by Glen Sussman, professor of political science, was entitled: "Reflections on the 2014 Midterm Elections." It demonstrated the expertise across political issues in Old Dominion University political science faculty.

Jesse Richman, associate professor of political science, presented data on why voters made the choices they did on Nov. 4. Richman said it's clear from the results of races across the country that Republicans outperformed polls, even almost knocking off powerful Virginia Democratic Sen. Mark Warner.

"What most people, myself included, expected to be a comfortable win for Senator Warner, ended up much closer than expected," Richman said of the race, which had Warner ahead by less than one percent over his Republican challenger Ed Gillespie.

Simon Serfaty, professor and Eminent Scholar, gave an international perspective to the election results. He said that typically only about one in eight voters make their ballot decisions based on foreign affairs, but that the turnover of President Barack Obama's foreign policy leadership team, "from a team of rivals to a team of his friends" has made the public trust the White House less on issues of foreign policy.

"His performance on foreign policy over the past two years has not been very good. It's time to put his house, the White House, in order. He has a blind date with history in November 2016. He wants to deliver a legacy," Serfaty said.

Tom Chapman, assistant professor of political science, spoke about the surprisingly minimal effect the issue of same-sex marriage appeared to have on the midterm elections. Chapman said with Supreme Court decisions striking down state statutes banning gay marriages, marriage certificates have started to be issued in many states, including Virginia, within the past month. Former opponents of same-sex marriage have gone silent.

"This issue has been taken from legislative bodies and placed in the hands of the judiciary. At the same time, everything seemed to change," said Chapman, noting that 18 states legalized same sex marriage in a two-week period this fall, and it didn't become a campaign issue.

Shenita Brazelton, assistant professor of political science, said this was the first statewide election in Virginia since the Voting Rights Act of 1965 was passed where voters had to show ID to cast ballots, a fact which Brazelton said is shown to reduce turnout of minority voters.

She said it's too early to say if there was a measurable effect on voter turnout in Virginia, since midterm elections typically see far lower turnout.