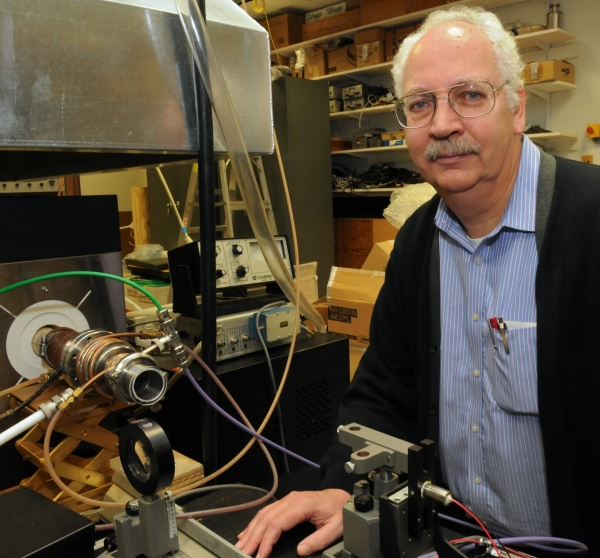 Chemist Peter Bernath in his lab at ODU

The "little treaty that could." That's the way The New York Times headlined a story in December of last year about the Montreal Protocol, explaining that this agreement aimed at saving earth's ozone layer is widely seen as the most successful global environmental treaty ever.

But about that same time, a team of scientists - including Old Dominion University chemist Peter Bernath - was dealing with atmospheric measurements that seemed to conflict with the protocol's rave reviews.

The way these scientists resolved the conflict, and are now throwing their unmixed support behind the "little treaty that could," makes for an interesting detective story published this week in the journal Nature.

The Montreal Protocol of Substances that Deplete the Ozone Layer was signed in 1987 not long after a hole in the ozone layer was discovered over Antarctica. The depleted ozone was blamed largely on emissions of the chlorofluorocarbons (CFCs) that at the time were commonly used as refrigerants in refrigerators and air conditioners, and as propellants in cans of hair spray.

Both ozone and oxygen gas are allotropes of oxygen, and they are abundant in the ozone layer in the earth's upper atmosphere, or stratosphere. The ozone layer forms naturally in the stratosphere, where ozone and oxygen gas are always converting into each other, becoming the earth's "sunscreen." Ozone absorbs ultraviolet rays; without this layer the sun would fry life on earth.

Beginning around 1970, scientists began to report significant threats to the ozone layer from chlorine that resulted from human use of CFCs and other chlorine-containing source gases. The chemical inertness of CFCs allows their transport and mixing throughout the lower atmosphere, or troposphere, on a global scale. Then, when CFCs reach the stratosphere they release chlorine atoms that cause ozone depletion.

Within a decade of the implementation of Montreal Protocol's bans on CFC pollutants, chlorine concentrations in the stratosphere started to fall, as scientific models had predicted. From about 1996 to 2007, there were steady drops in the chlorine.

But beginning in 2007, scientists doing regular analysis of chemicals in the northern hemisphere lower stratosphere noticed a rise in the hydrogen chloride (HCI) that is the main stratospheric chlorine reservoir, and a threat to the ozone.

Here's where the mystery reared its head, as described in this week's Nature article.

The scientists who wrote the article - there are 27 of them from around the globe, led by Emmanuel Mahieu of the Institute of Astrophysics and Geophysics at the University of Liege, Belgium - report that they wondered if increases in stratospheric chlorine-containing source gases between 2007 and 2011 resulted from breaches of - or loopholes in - the Montreal Protocol. Could the increases "result from the significant contribution of new unknown sources of chlorine whose emissions occur predominantly in the northern hemisphere, not monitored by the in situ networks, and unregulated by the Montreal Protocol, its Amendments and Adjustments," they write in the article? They found some evidence that new sources of chlorine have been recently identified, but they eventually ruled out this possibility because new sources could not account for the magnitude of the increases they were detecting in the northern hemisphere.

Could scientists be simply underestimating how much chlorine actually is derived from chlorine-containing source gases that rise into the stratosphere? The article's authors tested that theory but determined that "there is a good understanding of the chemistry which converts source gases to HCl."

In the end, it was physics as well as chemistry that gave them their answer, as is evident from the title of the Nature article: "Recent Northern Hemisphere Stratospheric Hydrogen Chloride Increase Due to Atmospheric Circulation Change."

Stratospheric circulation models indicated that after 2006 there was a slowing of the circulation in the northern hemisphere lower stratosphere and that the air there was "older" than in the southern hemisphere, where HCl levels were not showing the rise beginning in 2007. The authors attribute this circulation slowing to short-term variability.

"We conclude that the Montreal Protocol is still on track, and is leading to an overall reduction of the stratospheric chlorine loading. However, short-term multiyear variability in the stratospheric circulation and dynamics, as identified here, could head to further unpredictable increases or redistribution of HCl and other stratospheric tracers. Therefore, such variability and its causes will have to be thoroughly characterized and carefully accounted for when evaluating trends or searching for ozone recovery."

The article has been promoted by Nature ahead of the publication date on Thursday, Nov. 6. Nature's Press Office issued a media release late last week that highlighted this research under the headline of "Environment: Hydrogen Chloride on the Rise in the Northern Hemisphere." The release begins with this paragraph: "A significant increase in hydrogen chloride (HCl) since 2007 in the lower stratosphere of the Northern Hemisphere is reported in this week's Nature. The research suggests that this increase is not caused by unidentified chlorine-containing gases, but is caused by the recent slowing of stratospheric circulation in the Northern Hemisphere after 2005."

Many of the scientists identified as authors of the Nature article are involved in ground-based measurements that keep track of the chemicals in the atmosphere. But the recent research of ODU's Bernath has centered on satellite-based remote sensing using Canada's Atmospheric Chemistry Experiment (ACE), and ACE data were included in the research that produced the Nature article.

Bernath, professor of chemistry and biochemistry at ODU, is mission scientist for ACE, which is housed in the Canadian SCISAT satellite. ACE was expected to gather data for two years when SCISAT was launched in 2003, but is still operating today. "The mission has been a great success, and the longevity a real bonus," Bernath said. "It has produced an enormous amount of high quality data and helped us understand long-term trends in the composition of the atmosphere."

The two instruments on board the satellite measure atmospheric levels of more than 30 different molecules - more than have ever been measured by a single instrument from space before - and improve our understanding of the depletion of the ozone layer, especially the changes occurring over Canada and in the Arctic. The scientific scope of the ACE mission has expanded beyond ozone measurements to include monitoring carbon dioxide and other greenhouse gases.

A book edited by Bernath titled "The Atmospheric Chemistry Experiment (ACE) at 10: A Solar Occultation Anthology" was published on the experiment's 10 anniversary last year. The book, which also includes articles by Bernath, it is a compilation that originated from an international conference he organized and hosted at ODU in 2012.

In 2011, Bernath received the Faculty of Science Distinguished Alumni Award of the University of Waterloo, Ontario. That award is bestowed upon Waterloo alumni who have demonstrated significant contributions in the areas of professional or academic achievement and contributions to community and public service. Bernath received a bachelor's degree in chemistry from Waterloo in 1976.

He has been the lead scientist for ACE since the mission planning began in 1998. Bernath initiated that project while he was on sabbatical as Visiting Professor in Belgium at Université Libre de Bruxelles. The ACE mission began while he was he was a professor of chemistry (with a cross appointment in physics) at Waterloo.

Bernath earned a Ph.D. in physical chemistry in 1981 from the Massachusetts Institute of Technology and he became an associate professor at the University of Arizona in Tucson before taking a faculty position at Waterloo in 1991. He came to ODU in 2011 from the University of York in England.