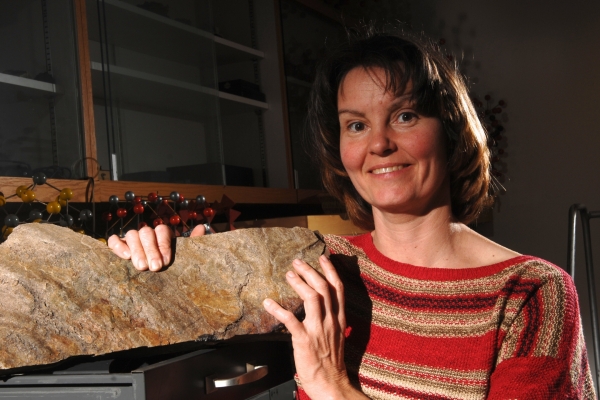 Old Dominion University geobiologist Nora Noffke has been named a Fellow of the American Association for the Advancement of Science (AAAS), which is one of the highest honors a scientist can receive.

Noffke was among 20 inductees chosen in the Geology and Geography Section. A citation bases her selection on her "seminal contributions to the field of geobiology, particularly for elucidation of the previously unrecognized 3.5-billion year fossil record of microbially induced sedimentary structures."

Election as an AAAS Fellow is an honor bestowed upon AAAS members by their peers. This year, a total of 401 members have been awarded this honor by AAAS because of their scientifically or socially distinguished efforts to advance science or its applications. New Fellows will be presented with an official certificate and gold and blue rosette pin on Feb. 14 during the 2015 AAAS Annual Meeting in San Jose, Calif.

This year's AAAS Fellows will be formally announced in the AAAS News & Notes section of the journal Science on Nov. 28.

Noffke, who has won international recognition during the past decade for research establishing microbially induced sedimentary structures (MISS) as evidence of earliest life on Earth, was the lead author of a paper in the journal Astrobiology in 2013 that documents the discovery of 3.48 billion-year-old MISS, the oldest ever reported.

The Astrobiology article stirred media interest all over the world, and secured Noffke's position among scientists who are leading the effort to find evidence of the microbes that were Earth's first life forms. Because microbes are so small, no one has found direct fossil evidence of their existence so long ago. Therefore, scientists such as Noffke have had to come up with ingenious ways to build evidence that microbes actually lived on Earth nearly 3.5 billion years ago.

Noffke and colleagues discovered MISS in 3.48 billion-year-old rock in the Dresser Formation, Pilbara, Western Australia. They believe the structures could be the best and oldest evidence yet that microbes had colonized tidal pools on Earth during the early Achean period, which extends back 4 billion years. The structures - due to their age - might also provide scientists with clues about geologic evidence of microbial life that exists, or might have existed, on Mars.

Field trips by Noffke to South Africa and Australia have turned up geological samples supporting her case that the mats woven of tiny microbes we see today covering tidal flats were also present as life was beginning on Earth. The mats, which are colonies of cyanobacteria, can cause unusual textures and formations in the sand beneath them. Noffke has identified 17 main groups of such textures caused by present-day microbial mats, and has found corresponding structures in geological formations dating back through the ages.

"This is a great honor for professor Noffke, and added evidence that faculty research at Old Dominion University is nationally and internationally competitive," said Morris Foster, the ODU vice president for research.

Noffke said, "This selection as AAAS Fellow feels great. I am really honored to have received this very high recognition. Actually, it came quite unexpected." Robert M. Hazen one of her research colleagues from the Carnegie Institution in Washington, D.C., was among those who nominated her.

Three other ODU faculty members are AAAS Fellows. Two are in the Department of Ocean, Earth and Atmospheric Sciences, Cynthia Jones, Eminent Scholar and professor, was elected in 2009 and Larry Atkinson, Eminent Professor and the Samuel M. and Fay L. Slover Professor of Oceanography, in 1990. The other Fellow is X. Nancy Xu, professor of chemistry and biochemistry, who was elected in 2011.

The tradition of AAAS Fellows began in 1874. Currently, members can be considered for the rank of Fellow if nominated by the steering groups of the Association's 24 sections, or by any three Fellows who are current AAAS members (so long as two of the three sponsors are not affiliated with the nominee's institution), or by the AAAS chief executive officer. Fellows must have been continuous members of AAAS for four years by the end of the calendar year in which they are elected.

Each steering group reviews the nominations of individuals within its respective section and a final list is forwarded to the AAAS Council, which votes on the aggregate list.

The council is the policymaking body of the association, chaired by the AAAS president, and consisting of the members of the board of directors, the retiring section chairs, delegates from each electorate and each regional division, and two delegates from the National Association of Academies of Science.