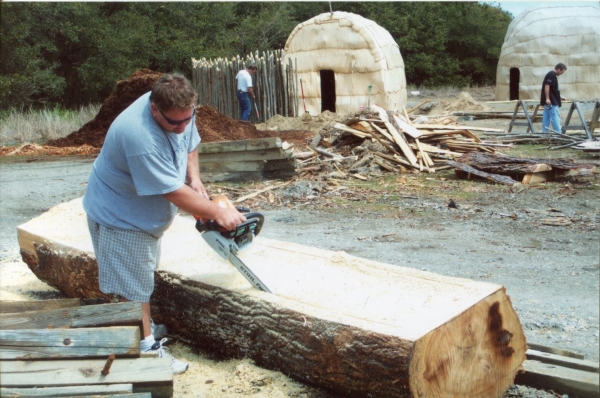 Members of the Suffolk-based Nansemond Indian Tribe will help Old Dominion University celebrate Native American Heritage Month at an event in the North Mall of ODU's Webb University Center on Monday, Nov. 10. The "We Are Still Here" presentation is sponsored by the ODU Office of Intercultural Relations.

A delegation of tribe members led by Chief Barry Bass, as well as ODU anthropology Professor Emerita Helen Rountree, will present demonstrations, artifact touch tables, exhibitions and interactive opportunities to anyone interested in the Nansemond tribe's history and culture.

Among the Nansemond presenters will be Lee Lockamy, who works in Auxiliary Services at ODU and whose avocation is building structures, including longhouse "yeehawkans," that are replicas of the Nansemond living quarters that English settlers saw when they first arrived in southeastern Virginia early in the 17th century.

Lockamy is building a yeehawkan at the Nansemond tribe's planned Mattanock Town in Suffolk, and he hopes to enlist volunteers from the ODU community to assist in the construction. During the past decade he has built more than 24 of these houses and other Indian structures, mostly for special exhibitions in Virginia Beach.

When he was 20 years old, Lockamy learned that he was descended from the Nansemonds through his father's family. During the last 15 years, he has been very active in promoting the recently revitalized 200-member tribe, often working in conjunction with Rountree. She has long been a champion of the Powhatan Indian nation, with which the Nansemonds were associated.

Rountree has helped with the plans to build Mattanock Town on 70 acres the city of Suffolk gave to the Nansemonds. She serves as secretary and historian for the tribe, and has written numerous books about Native American tribes on the mid-Atlantic coast. "She's always been on the side of the Indians," Lockamy said. "She's opened up a lot of doors for us."

Lockamy has also served as a tribal historian and has a collection of Indian artifacts that he has found or inherited. But his main contribution to the tribe has been his construction of the yeehawkans. He uses hardwood branches that are bent to form arched frames, and the frames are covered with layers of reed mats.