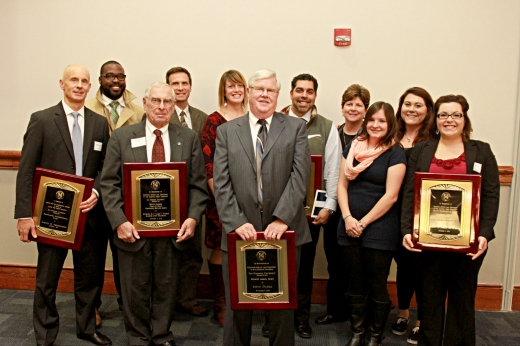 The luncheon - a tradition on the campus since 1987 - was scheduled for the Big Blue Room of the Ted Constant Convocation Center. The following awards were given:

ODU Community Service Award, which is presented in recognition of the contributions of faculty, staff and student leaders to service in communities in Hampton Roads and elsewhere, will go to the Park, Recreation and Tourism Studies (PRTS) program in the Darden College of Education.

The PRTS faculty members combine teaching, service and research in a format that provides students with theories and learning in the classroom and opportunities to apply them in real-world experiences of community service and teaching environments outside the classroom. The students in PRTS have engaged in community-based service and research at the undergraduate level with a number of organizations, including CARE Now Afterschool Program at Blair Middle School, the annual Little Feet Meet Special Olympics, the City of Norfolk, SportableTM Paralympic Experience Day, and in survey and data collection for the Norfolk Convention & Visitors Bureau, Virginia State Parks, and the Virginia Beach oceanfront, to name a few.

Monarch Legacy Award, which is an honor inaugurated last year to recognize a member or members of the ODU community whose actions made a significant impact on the campus community, was given to Steve Daniel ('07H).

Daniel retired from ODU in June 2014 after nearly 33 years of service. A Virginia Beach resident, Daniel wrote for and edited several award-winning periodicals during his time at the university. He worked in marketing and communications throughout his ODU career, serving as editor of Alumnews and The Courier for more than two decades (1986 to 2009), and as the editor of Old Dominion University magazine for 12 years.

Most recently, Daniel served as editor of InsideODU, the university e-newsletter, from its inception in late 2010 until his retirement, and edited Community Connection, a newsletter produced by ODU for residents and business owners in neighborhoods near the campus. He penned the popular "Then & Now" column in Monarch magazine and served as copy editor for the ODU Regional Studies Institute's State of the Region report since the annual publication began in 2000.

Daniel is a recipient of the ODU Customer Relations Employee of the Year award (1991) and an Honorary Alumnus award (2007) from the ODU Alumni Association. He was a member of both the Hourly and Classified Employees Association (HACE) and the Association of University Administrators.

In his retirement, Daniel serves as a Child Life volunteer at Children's Hospital of The King's Daughters in Norfolk. He also teaches Sunday school and serves on the Committee on Ministries at the Unitarian Church of Norfolk. In addition, he continues to pursue his hobbies of nature photography and writing poetry and song lyrics

Rita M. Costello Town-N-Gown Community Service Award, which is given by the board of Town-N-Gown, an independent, informal association of men and women dedicated to developing a mutual understanding between ODU and the various civilian and military communities of Greater Hampton Roads, went to Rear Adm. Byron "Jake" Tobin, U. S. Navy (Ret.).

Until his third and final retirement July 1, 2007, Tobin was the executive director of the Hampton Roads Naval Historical Foundation. He oversaw the foundation's efforts in support of the Hampton Roads Naval Museum, located in the National Maritime Center. Prior to that position, Tobin was the president of the Center for Public/Private Partnership (CP Cubed), an organization dedicated to forging mutually beneficial partnerships among military, government and business entities in Hampton Roads. A New Jersey native, Tobin graduated from the Wharton School of Finance and Commerce of the University of Pennsylvania and holds a master's degree in international affairs from George Washington University.

Tobin's naval service spanned 36 years. He is a decorated naval aviator who logged more than 6,000 hours as a pilot performing anti-submarine warfare missions throughout the world. He held nine Navy commands prior to retiring in 1996; his last assignment was serving as Commander, U. S. Naval Forces in Japan. His community work includes top leadership roles with The Planning Council, Norfolk Festevents, Westminster Canterbury of Virginia Beach, and the General Douglas MacArthur Foundation. He serves on the boards of The Future of Hampton Roads Inc., the Norfolk Convention and Visitors Bureau and the Town Point Club; and he currently serves as senior warden of the vestry of Christ and St. Luke's Church in Norfolk.

Until her passing in 2010, Tobin's constant companion and lifelong shipmate was his wife, Sally Maguire. Sally is the sponsor of the USS Pioneer, MCM-9, which she christened in 1990. Together they raised two children, Meredith and Byron, and have six grandchildren.

This award is named in memory of Rita M. Costello, who was a member of Town-N-Gown and a tireless, dedicated community service volunteer.

Albert B. "Buck" Gornto Jr. Regional Service Award, which is given to a resident of Hampton Roads who has shown outstanding commitment and service to the region, went to two recipients: Lisa Howard and Ashlynn Baker '06.

Howard is the president and chief executive officer of E3: Elevate Early Education, an entrepreneurial venture created by business, civic and philanthropic leaders to aggressively pursue and challenge policymakers to make early education a priority in our state.

Working in partnership with the University of Virginia Center for Advanced Study of Teaching and Learning, community leaders and philanthropists, Howard is creating a demonstration model school focused on the most important elements of a quality education. Located in Norfolk's Park Place neighborhood, the New E3 School will serve 104 children ages 1-5 from diverse socioeconomic backgrounds.

For more than 25 years, Howard has been dedicated to giving all children a quality education. A former public school teacher, Howard most recently served as the CEO of Smart Beginnings South Hampton Roads and worked to raise awareness, advocate for greater investment in young children at a critical time in their development and improve our early education system in the region. She has demonstrated a passion for improving the lives of children.

Howard was an honoree for Inside Business' "Top Forty Under 40" in 2007, and is a CIVIC Leadership Institute graduate.

Baker has known since age 13 that she wanted to be a nurse who worked with babies, and today she is a volunteer at the Children's Hospital of The King's Daughters (CHKD). She graduated from ODU with a Bachelor of Science in Nursing and began working as a registered nurse in the Neonatal Intensive Care Unit (NICU) at CHKD.

Baker not only provided bedside care to the hospital's smallest and most fragile patients but also worked on initiatives to improve their survival and outcomes. In 2011, Baker and a multidisciplinary team researched initiatives aimed at decreasing the rates of necrotizing enterocolitis (NEC), a devastating and sometimes-fatal bowel disease that primarily affects premature infants. The team concluded that the best way to prevent NEC was to provide preemies with human milk diets, preferably mothers' own milk.

In October 2012, under Baker's leadership, CHKD started offering pasteurized donor human milk to at-risk babies, primarily pre-term, low birth weight, or critically ill infants whose mothers' own milk was unavailable. In 2014, Baker gladly accepted the position of milk bank manager, and in June the hospital launched the first nonprofit milk bank in Virginia and one of only 18 in North America. Baker works daily to help improve outcomes and decrease mortality rates among the hospital's tiniest patients.

This award is named in memory of Albert B. "Buck" Gornto Jr., who was a 1957 graduate of ODU and served on the Board of Visitors from 1970-78. The Albert Brooks Gornto Jr. Teletechnet Center was named in his memory in 1998.

Distinguished Entrepreneurial Award, which is presented to individuals who, through their creative spirit and leadership, have strengthened the vitality and progress of the Hampton Roads business and educational communities, was given to Steve Fredrickson.

He has been a leader in the financial services industry for more than 30 years, holding positions with both Continental Bank and Household Commercial Financial Services. In 1996, he and three colleagues from Household founded Portfolio Recovery Associates, now PRA Group, with a goal of creating a debt-buying business whose collection operations were compliant, sophisticated and highly efficient.

Almost two decades later, Fredrickson's vision that started with four founders and three collectors has become a global enterprise. PRA Group provides debt sellers across North America and Europe with a professional and compliant partner as well as giving customers greater time and flexibility to repay their debts. The company has worked with nearly 44 million customers in 16 countries, and employs more than 4,000 people globally.

Under Fredrickson's leadership, many of PRA Group's 1,500 employees in Hampton Roads are actively contributing to community outreach. This year, he chaired the United Way of South Hampton Roads annual campaign, helping raise $18.8 million. Fredrickson is also an executive advisory council member of ODU's Strome College of Business, a trustee of the Eastern Virginia Medical School Foundation and a director of the St. Mary's Home Foundation.