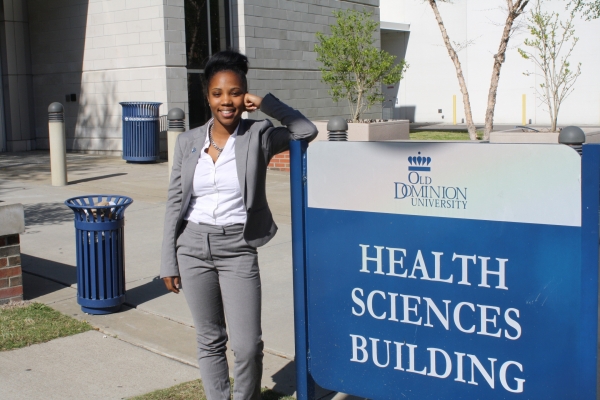 The accolades keep rolling in for Cherese Lewis, who graduated in May from Old Dominion University with a degree in public health.

Lewis was recently selected to receive the Gamman of the Year award from Eta Sigma Gamma, a national health education honorary society.

The society, which was founded in 1967, has more than 80 chapters at colleges and universities in the United States and Canada. Among its goals are "supporting the planning, implementation, and evaluation of health education programs and resources, stimulating and disseminating scientific research, recognizing academic achievement, supporting health education advocacy initiatives and promoting professional standards and ethics."

Gamman of the Year is one of highest awards that a member can receive. Eta Sigma Gamma will present the award to Lewis at its 2015 annual meeting in Portland, Ore.

Lewis was nominated by the faculty advisor of the ODU Epsilon Theta Chapter of Eta Sigma Gamma Honor Society. She received the Eta Sigma Gamma Scholarship Key Award for having the highest cumulative grade point average among local members.

Lewis is teaching this fall at Churchland Middle School in Portsmouth, and plans to apply to medical school next year.