Old Dominion, Recognized Again as 'Best for Vets,' Pauses to Honor Those Who Serve 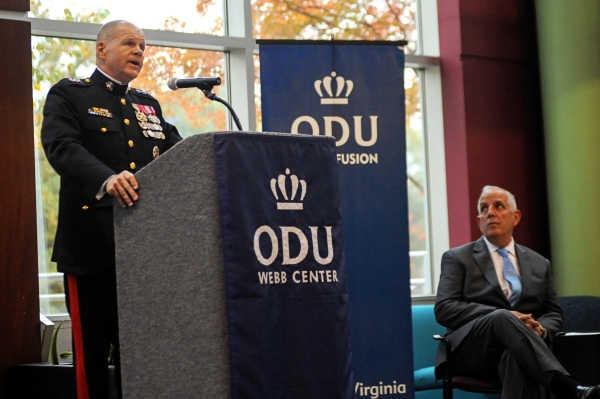 Old Dominion University has been ranked 14th nationally in the "Best for Vets: Colleges 2015" rankings by the national publication Military Times.

That is a 16-spot increase for ODU in the rankings, making the University the top-ranked school in Virginia in the four-year school category. For the full Best for Vets: Colleges 2015 rankings, go to: www.militarytimes.com/bestforvets-colleges2015.

As an overflow crowd of uniformed military personnel, faculty, staff and students filled the North Mall of Webb University Center, President John R. Broderick told the audience that Veterans Day takes on an added significance at ODU, and in the region, with more than 500,000 residents of Hampton Roads having a direct military connection.

"In keeping with Old Dominion's strategic priorities, our veteran enrollment continues to rise and we are working continually to better define and demonstrate what it means to say, 'We are a military-friendly university,'" Broderick said.

In an emotional address, Neller recounted a story from Iraq in 2006, when he encountered a young marine, Lance Cpl. Tyler Christ, who had just lost a friend and unit member to an IED explosion while on patrol.

Pausing several times to compose himself, Neller said this soldier exemplified the very best of the U.S. Marine Corps, and the entire military, by suffering a tragic loss, but getting up the next day, "pulling on a uniform, and performing a duty, to their comrades, and their country. I told him how proud I was, to be able to serve with men like him," Neller said.

In their fifth year, the "Best for Vets" rankings factor in the most comprehensive school-by-school assessment of veteran and military students' success rates.

Several hundred schools participated in this year's survey, filling out a detailed questionnaire with more than 100 questions that delved into the issues most crucial to student vets. To decide which schools made the list and where they should be ranked, Military Times compared not only schools' survey responses, but also data compiled by the U.S. Education Department, including academic success measures.

ODU was recognized for having a dedicated Veterans Center and for accepting American Council on Education credits. The assessors at Military Times gave ODU a four-star rating for extracurriculars, a three-and-a-half star rating for academic support, and a three-star rating for staff support.

ODU offers a range of services for student veterans through its Military Connection Center and Student Veterans Association. The Hampton Roads Veterans Business Outreach Center, which provides support and expertise to veteran entrepreneurs in a six-state region in the Mid-Atlantic, is headquartered at ODU.

The Military Connection Center was created last fall to help the university's substantial military-affiliated population in a variety of ways. For the past five years, G.I. Jobs, the premier magazine for military personnel transitioning to civilian life, has recognized ODU as a "Military Friendly" institution. Nearly 25 percent of the university's student body has a direct connection to the U.S. military.

The Military Times' Best for Vets series provides service members a gauge by which to judge whether a school or degree program will truly benefit them. The rankings factored in service member enrollment, percentage of tuition covered by the GI Bill and availability of specific programs to help service members.

The rankings are published in full in the November issue of Military Times Edge magazine, the premier publication for military transition, and online at MilitaryTimes.com, as well as ArmyTimes.com, NavyTimes.com, AirForceTimes.com and MarineCorpsTimes.com.