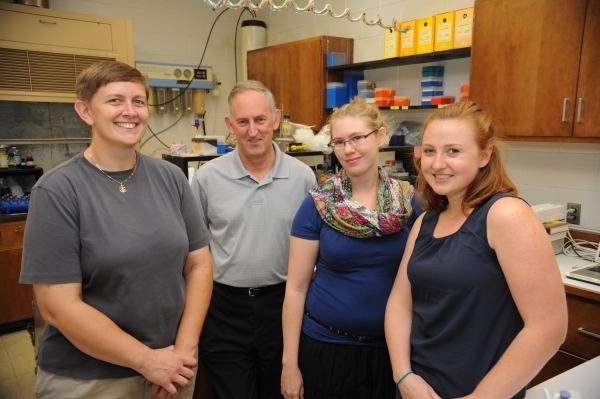 Two biology doctoral students at Old Dominion University have received highly competitive awards from the Jayne Koskinas Ted Giovanis (JKTG) Foundation for Health and Policy to support the students' research about the distribution of ticks and the diseases they transmit.

Robyn Nadolny, whose adviser is Holly Gaff, associate professor of biological sciences, and Chelsea Wright, whose adviser if Wayne Hynes, professor and chair of the Department of Biological Sciences, made ODU a double winner in this year's JKTG Foundation Dissertation Support Grants competition.

Nadolny's research topic is "The Anatomy of Invasion: Understanding and Predicting Tick Range Expressions" and she received a grant of about $14,000. Wright's topic is "Exploring the Prevalence, Distribution and Transmission Dynamics of Tick-Borne Pathogens in Southeastern Virginia" and her grant was more than $25,000.

Two tick species that are invading the mid-Atlantic are the focus of Nadolny's research. "I am looking at how differences in their behavior have affected the patterns in which they are expanding their ranges," she explained.

"My hope is to be able to understand the mechanisms by which these ticks are moving around - what hosts and habitats are important to their survival and dispersal," Nadolny said. "I will use knowledge of their ecology to predict where they might be going next. This has public health relevance because both species are known to carry human pathogens, and the expanding range of these ticks is putting more people at risk."

Nadolny will use the JKTG support for molecular studies of tick genetics and connectivity between populations of ticks. She will also use the money to travel to collect ticks in the United States and Central America.

Wright's focus is on ticks in southeastern Virginia. The ODU Tick Ecology Laboratory is conducting year-round tick surveillance at multiple locales in this region and is currently in the sixth year of the project.

"In 2010, our lab discovered that a new tick species, the Gulf Coast tick, had recently invaded Virginia," Wright said. "This species is bringing with it an emerging tick-borne pathogen, Rickettsia parkeri, which causes a disease in humans called Tidewater spotted fever." That disease is similar to, but milder than Rocky Mountain spotted fever.

With her research and stipend support, Wright will be able to probe deeper into the nature of this tick-borne pathogen and its potential vectors. "Specifically, I will be determining the potential for Rickettsia parkeri to be carried by other commonly-encountered tick species in Virginia, which would pose an important threat to human health in this region."

Wright will be using novel sequencing technology to determine the bacterial community present within ticks collected in southeastern Virginia to find whether there are differences between ones that transmit disease and ones that don't.

Ted Giovanis, the president of the Maryland-based JKTG Foundation, said, "Our mission is to facilitate honest public discussion of some of our nation's most challenging health policy dilemmas, and we believe aiding next generation research is key to that. I congratulate our recipients and look forward to their continued contributions."