Are You Up to the Pumpkin Drop Challenge? 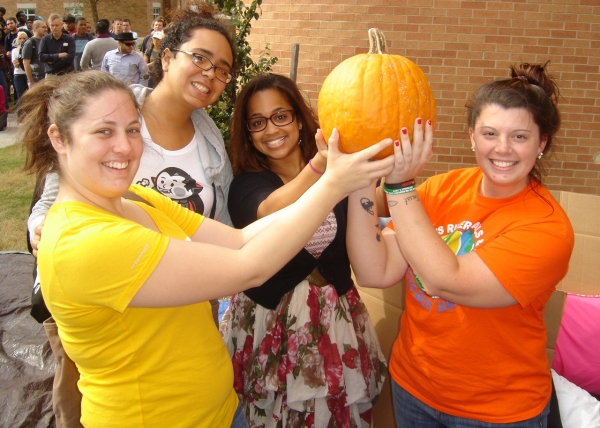 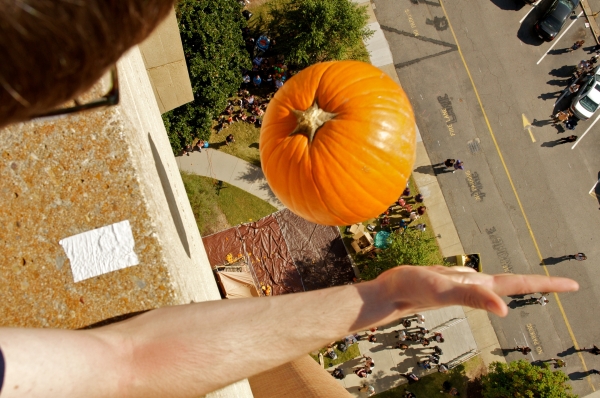 The annual Pumpkin Drop sponsored by the Old Dominion University Society of Physics Students (SPS) has become a popular autumn event on campus over the past two decades, and this year the competition may be the most intense ever.

Although the Pumpkin Drop is traditionally held close to Halloween, this year's event will be Thursday, Nov. 13, late enough into the fall semester to give creative students, both at ODU and elsewhere, more time to design and build the pumpkin catchers that will be tested in the competition.

Each entrant - usually teams of students - is challenged to build a portable contraption that can "catch" a pumpkin dropped from atop the nine-story Batten Arts and Letters Building. Physics students usually dominate the entrant list, but the contest is being announced early enough this year to hopefully attract students from other disciplines, such as engineering.

Apart from the fun of watching pumpkins perilously plummet from nine stories high, teams will study the effectiveness of different pumpkin catcher designs for harmlessly dissipating the pumpkins' kinetic energy. Past pumpkin catchers have ranged from simple buckets of mud to complicated counterweighted structures; straw, balloons and air mattresses are often used in the construction.

SPS members will also demonstrate some entertaining mechanics experiments. This event, which is fun for all ages, will run from noon until 2 p.m. The staging area will be on the north lawn of BAL.

Prizes (or extra credit) will be awarded for the best pumpkin catchers, judged for effectiveness, height and creativity of design. This year, pumpkins will be provided solely by ODU.

This event is open for everyone. Anyone interested in participating and forming a team should contact: Stephen Bueltmann (sbueltma@odu.edu) and/or Mathieu Ehrhart (mehrh002@odu.edu) Extensive rules are below.

In the past, people have used empty milk jugs, water balloons, straw, etc. Successful pumpkin catchers have ranged in height from 2 to 10 feet tall.