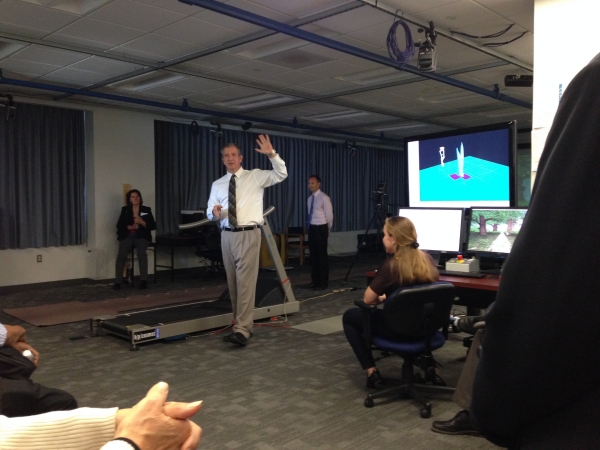 Steven Morrison, professor and director of ODU's Center for Brain Research and Rehabilitation, gives a presentation as part of NeuroConnections 2014.

Invited speakers from the National Institutes of Health, University of North Carolina-Chapel Hill, Duke University and the New York State Department of Health shared insights about the multidisciplinary, rapidly evolving field of neuroscience.

Dean Krusienski, ODU associate professor of electrical and computer engineering and director of the ASPEN (Advanced Signal Processing in Engineering and Neuroscience) Lab, served as conference host. Krusienski said the event was designed to provide a forum for forming new, potentially unconventional, collaborations to advance the field of neuroscience - the study of the structure and function of the nervous system, particularly the brain.

"By unconventional, we mean bringing in methods and ideas from scientists, engineers and clinicians that aren't currently working in neuroscience," Krusienski said. "A lot of inspiration and innovation comes from exposure to ideas from outside disciplines."

The event featured a wide range of presentations and posters from members of the HRNN, a partnership between NASA and six local colleges and Universities (ODU, Christopher Newport University, Eastern Virginia Medical School, Hampton University, Norfolk State University and the College of William and Mary), as well as a panel with the nationally recognized experts.

The Hampton Roads Neuroscience Network was formed in 2011 after discussions between Krusienski, Noah Swartz, formerly of Christopher Newport University, and Bill Wasilenko and Larry Sanford of EVMS made the researchers realize the depth of significant neuroscience research in the region, despite no university having a major, established neuroscience program.

"This group gives neuroscience research an identity in Hampton Roads and will allow us to be more competitive for larger funding initiatives," Krusienski said.

Recent federal neuroscience initiatives demonstrate the importance of research in the field for the future of science, medicine and technology. "We believe that bringing local neuroscientists and experts from other disciplines together will generate new ideas and innovations to advance the field," Krusienski said.

Old Dominion University's ASPEN Lab is focuses on the development of advanced signal processing and pattern recognition techniques to analyze and decode neural signals for brain-computer interfaces and other neural engineering applications.

A brain-computer interface (BCI) is a system that allows a user to control a device directly using their brain activity. BCIs and related technologies can be used in assistive, rehabilitative, augmentative, diagnostic, or therapeutic applications.

Krusienski's background is in electrical engineering, but he became interested in BCIs in his time working on signal processing for neural decoding at the New York State Department of Health. He has been at Old Dominion University since 2010.

NeuroConnections 2014 was sponsored by ODU's Frank Batten College of Engineering and Technology and Office of Research.