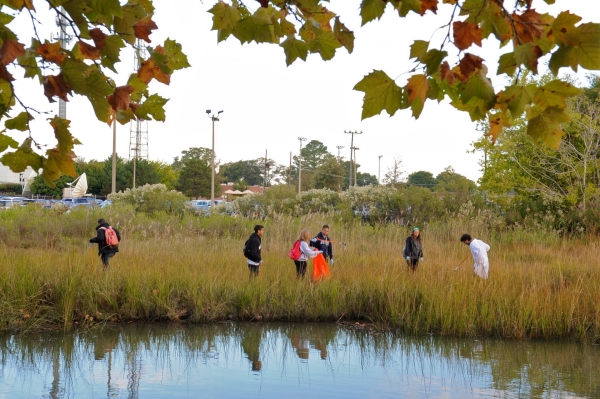 Students clear the shoreline on Colley Bay as part of the Monarchs for Monarchs service learning project.

Students have really dug into their studies this week in Tatyana Lobova's Environmental Sciences course, and in the process, given a boost to Old Dominion University's innovative Monarchs for Monarchs project.

This week, as a service initiative, Lobova, senior lecturer of biological sciences, has tasked the 400 students in her class with taking the Monarchs for Monarchs project outside of campus grounds.

"Thanks to the new partnership with the city of Norfolk's Department of Recreation, Parks and Open Space, we are expanding the butterfly garden into the Bluestone City Park in Larchmont," Lobova said.

Throughout the week, students from the Environmental Sciences course have prepared that site, along with other campus sites, for planting. Students in the spring course will plant milkweeds and other pollinator attracting flowers. Students in the class have also done shoreline cleanup, brush trimming and other "greening" projects around campus.

"We hope this project will bring more attention to the pollinators crisis in the U.S.," Lobova said.

The Monarchs for Monarchs program is a partnership among the Department of Biological Sciences of the College of Sciences, the ODU student Botany Club, the Orchid Conservatory, the ODU Grounds Department and Norfolk Botanical Garden.

Milkweed plants provide perfect habitat for monarch butterflies as they complete a multigenerational migration each fall and spring, traveling thousands of miles to and from wintering grounds in Mexico. Milkweed provides both food and habitat for the beautiful insects, and causes the monarchs - so named because they are considered to be the "king" of the butterflies - to secrete a toxin that makes them poisonous to predators, such as birds.

However, the population of monarch butterflies making the massive journey has declined sharply. The Monarchs for Monarchs program is part of a nationwide initiative to help the butterfly population stabilize. It's especially important here, because Norfolk and ODU are right on one of three main flyways the butterflies take on their migration.

Monarch butterflies typically are found in Norfolk throughout the summer and early fall. The butterflies that arrive here in the early summer are making their way back from their wintering grounds in Mexico. Monarch butterflies also leave and pass through the region during their fall migration south down the Atlantic Coast and west across the Gulf Coast.

"It is also the first formalized service-learning partnership done by an ODU class," Eddins said. "The City of Norfolk Department of Parks, Recreation and Open Space is excited about the collaboration, which aligns with Norfolk City Council's priorities of environmental sustainability and life-long learning.

In September, Old Dominion University was named to the 2014 President's Higher Education Community Service Honor Roll. The award marks the third consecutive time the University has been honored for its commitment to community engagement; however, this year the award was issued in the "With Distinction" category.

The honor roll "With Distinction" is given to applicants that "display strong levels of institutional commitment, provide a compelling case for partnerships that produce measurable impact in the community, and have a federal work-study community service percentage of 15 percent or above," according to a program description on the Corporation for National and Community Service's website.

The award was announced during the Fourth Annual President's Interfaith and Community Service Campus Challenge Gathering, at the George Washington University, in Washington D.C.