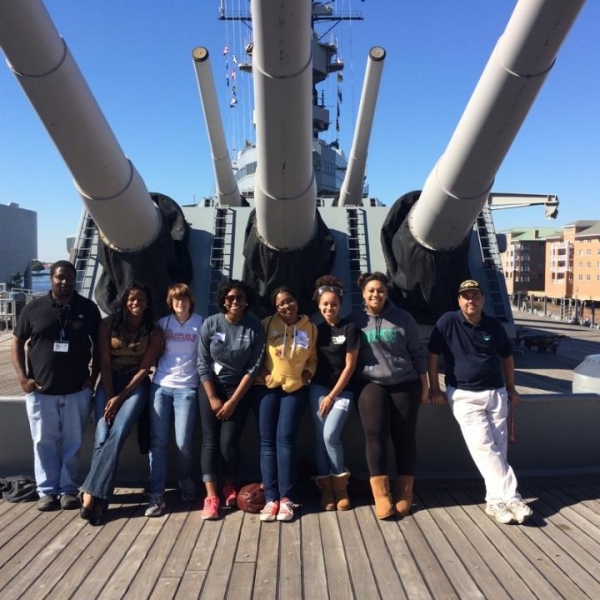 "ODU Make a Difference Day was awesome," said Catie Harris a member of the Community Service Council, a group of students dedicated to fostering a culture of service on the ODU campus. "It was hard work but it was worth every minute of it, knowing that the students of Old Dominion University made a difference within our community."

The effort was one of several activities held in the past week to celebrate public service at Old Dominion University. Public Service Week will culminate on Friday, Oct. 31 with the university's "reverse treating" Haul for Hunger event.

Between 12-2 p.m., students, faculty and staff are invited to help package several tons of sweet potatoes on Kaufman Mall, which will be redistributed to local food pantries in Hampton Roads. The first 100 students to arrive will receive a Minor in Public Service drawstring bag. Lunch is provided to all volunteers.

As part of Public Service Week, the Big Blue Take Back rally was held last Friday, Oct. 24, organized by student leaders from ODU Vox and Ladies of Prestige and Excellence. More than 300 volunteers took a pledge to play their part in preventing interpersonal violence, including stalking, harassment, sexual and relationship violence.

The Take Back Rally is a new addition to ODU's annual Red Flag campaign, created to inform the campus community of "red flags" of relationship violence. The event is also part of the nationwide "It's On Us" campaign, launched by the White House in September.

At the White House launch, ODU student Saige Hill spoke about efforts on this campus to prevent sexual violence, including last Friday's Take Back Rally. The goal of the campaign is to gather 5,000 pledges from ODU students committed to stopping relationship violence by winter break at http://itsonus.org/index.html. The White House will track the school's progress, which will be tallied on a banner in Webb Center.

The "Celebration Night" event was held to assemble F2F Kits which are designed to meet the immediate physical, emotional and psychological needs of those affected by sexual assault.