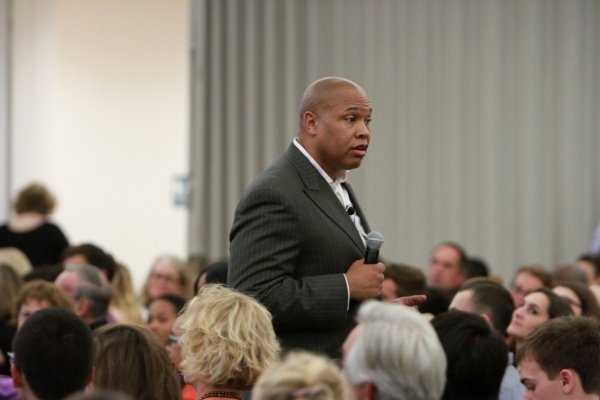 And Henderson's re-telling of his life saga lived up to every word.

The event was held in conjunction with the 37th annual ODU Literary Festival which has a theme this year of "The Hungry Heart is Telling You" and focuses on gastronomic-themed speakers, readings and discussions through Oct. 10. For more information, including a full schedule of events, visit the Literary Festival website.

Early in life, Henderson said he was a "homeboy" who grew up in impoverished neighborhoods in San Diego and Los Angeles. By the time he was 19, he was running a $35,000 a week crack cocaine distribution operation. At 24, he was arrested and sent to federal prison for 10 years.

Henderson noted that poverty creates an immediate need for gratification - the "I want it now syndrome," as he called it. He did poorly in school, and never read a book until his incarceration; however, Henderson said he understood the "economy of the underground" and was highly successful in the drug trade.

But that ended in 1988 when he was locked up at the Terminal Island Correctional Institution, that he now calls "federal university." While serving time with infamous white collar criminals like Ivan Boesky and others including the head of the Gambino crime family, Henderson "tapped into the brilliance of these guys."

A Wall Street convict told him he was "smart" and had a "gene for business."

It was the first time anyone had ever said anything like that to Henderson. Something clicked and he began to channel his energy in a more positive direction, discovering a passion for cooking and committing himself to turning his life around.

"In order to be successful in life, you have to be a beast," he said. "You have to see it. It's about vision. Living the American Dream is a strategy."

After spending nearly a decade behind bars and having no formal education, Henderson struggled for years in the hospitality industry. But, with persistence and determination, he achieved his dreams, eventually becoming the executive chef of Café Bellagio in Las Vegas.

His story was first told in the New York Times best-selling memoir, "Cooked: My Journey from the Streets to the Stove." In his newest book, "If You Can See It, You Can Be It," released in November 2013, Henderson's table overflows with a mission to put tomorrow's inspirational heroes and heroines from all backgrounds on a direct path to realizing their dreams.

His newest television show, "Family Style with Chef Jeff," demonstrates how good choices in the kitchen can lead to a life changing experience for the whole family. Henderson formerly was a host on "Beat the Chefs," which premiered in late summer, 2012, on the Game Show Network.

Now, Henderson said, he wants to change the legacy he grew up under.

"Today, I have a double-door refrigerator filled with choices for my children. Resilience was the key," he said. "I want to position my children to know they can have a dream; they can achieve something in life if they have purpose. Purpose gives you a foundation. When you have a foundation, you have vision."