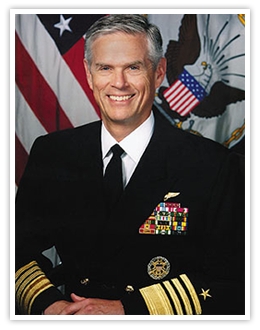 The Oct. 21 event will be held at 7:30 p.m. in the Big Blue Room of the Ted Constant Convocation Center, on Hampton Boulevard, across from the main ODU campus. The lecture is free and open to the public. Parking will be available in the 43rd Street garage.

Admiral Prueher's talk, "Way Ahead with China... in Today's World," will explore the rapid economic growth and demonstrated economic power that has made the nation a challenging subject. The former Ambassador said, in his talk, he will try to give a measured and realistic view of the Chinese, while never speaking for them, but rather drawing from his relationships with Chinese patriots, many of whom he calls friends. He would also like to convey their view of us as Americans.

"With his 35-year tenure in the U.S. Navy and his subsequent service as Ambassador to China, Admiral Prueher's perspective will definitely enhance our understanding of China today," said Qiu Jin Hailstork, executive director of the Confucius Institute at Old Dominion University.

Admiral Prueher completed thirty-five years in the United States Navy in 1999. His last command was Commander-in-Chief of the U.S. Pacific Command (CINCPAC); the largest military command in the world. He then served two U.S. Presidents as ambassador to the People's Republic of China from 1999 to 2001.

Admiral Prueher is the former James R. Schlesinger Distinguished Professor at the Miller Center of the University of Virginia, as well as Senior Advisor to the Stanford-Harvard Preventive Defense Project, working on dialogue for US-China security matters.

He serves as Director of Emerson, New York Life, and Fluor Corporation, and is a former Director of Merrill Lynch, Bank of America, DynCorp International and Amerigroup Corporation. He is also on the advisory Boards of Anadarko Petroleum, Huntington-Ingalls Industries and Earl Energy, LLC.

A member of The Council on Foreign Relations, he is also Vice Chairman of the National Committee on U.S. - China Relations.

Admiral Prueher is a member of several regional foundations in the Hampton roads region.