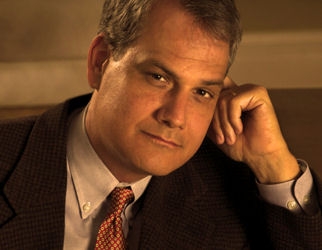 Old Dominion University professor, and critically acclaimed writer, Blake Bailey will join author and humorist David Sedaris for an on-stage reading Oct. 25 at the Sandler Center for the Performing Arts.

Sedaris is well-known for his sardonic humor and sharp social critiques. He is a playwright and regular commentator for National Public Radio. Sedaris is also the author of the bestselling titles that include, "Barrel Fever," "Naked," "Holidays on Ice," "Dress Your Family in Corduroy," "Denim," "When You Are Engulfed in Flames" and "Me Talk Pretty One Day." He travels extensively though Europe and the United States on lecture tours and lives in France.

Bailey is the Mina Hohenberg Darden Professor of Creative Writing at ODU. In 2010, he won the National Book Critics Circle Award and was a finalist for the Pulitzer Prize. Bailey has also been lauded as "addictively readable" by The New York Times and recognized by Time magazine for writing "compellingly and in harrowing detail."

In a blurb for Bailey's recently published memoir "The Splendid Things We Planned," Sedaris wrote: "This fine and haunting memoir touches the spot where family, responsibility and helplessness converge. It's not a pretty place, but boy has Blake Bailey made it memorable. 'The Splendid Things We Planned' is as forceful and revealing as any of the author's excellent biographies, and that's really saying something."

Bailey said Sedaris has been promoting the memoir, along with his own books, while on tour. "The Splendid Things We Planned" has been on sale in the lobby at every stop and those who buy a copy get to go to the front of the signing line, he said.

At the Sandler Center event, Bailey will read from the memoir.

To learn more about "The Splendid Things We Planned," visit Blake Bailey's website.