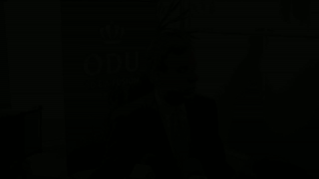 "Speaking as someone who saw cellphones as something more than a phone for your car, this could be the beginning of something huge," Warner said Friday, Jan. 24, during a visit to Old Dominion University.

An early investor in the cellular telephone business, and co-founder of the company that became Nextel, Warner chaired a roundtable meeting with government, military and industry leaders about Virginia's selection by the Federal Aviation Administration (FAA) late last year as one of six test sites for unmanned aircraft systems (UAS).

A coalition of Virginia universities, of which ODU is a member, is pivotal if the Virginia UAS test site is to be selected as a permanent FAA facility, Warner told those who had gathered at the university's Innovation Research Park.

"This is an exciting day for Virginia, and particularly for Hampton Roads. This is a chance for us to leverage our unique research assets, such as modeling and simulation at Old Dominion University," Warner said.

"We need to recognize that we are at the cutting edge of what can become a huge new industry, to not only fly these vehicles, but design and build them right here in Virginia, with our hub here in Hampton Roads."

John Sokolowski, executive director of ODU's Virginia Modeling, Analysis and Simulation Center (VMASC), has developed a national airspace simulation for further study of UAS. He said the opportunity for the university is unique.

"One of the unique elements that the Virginia team brings to this opportunity is our work in modeling and simulation. M&S will enable many of the policies and processes that will be developed to be tested in a virtual environment, to ensure they are safe and integrate with the many assets that share the airspace," Sokolowski said.

Local political figures attending the roundtable included Rep. Bobby Scott, D-Newport News; state Delegate Scott Taylor, R-85th District; and state Sen. Frank Wagner, R-Virginia Beach. Wagner, a member of the state Commerce and Labor and Transportation committees, said a state appropriation of more than $5 million has been set aside in this year's budget for the construction of a landing strip at the Mid-Atlantic Regional Spaceport on Wallops Island.

"We have a lot of synergies with the things that are already happening in Virginia," Wagner said. "This is a tremendous opportunity. That landing strip will be dedicated to UAS operations."

Among those at the roundtable was John S. Langford, founder, chairman and CEO of Aurora Flight Sciences Corp. Based in Manassas, Va., Aurora is a leader in the development and manufacturing of advanced unmanned systems and aerospace vehicles.

Langford showed a small UAS vehicle to those in attendance, which he said could be used perfectly in a school setting to teach aviation concepts.

On Jan. 15, the U.S. Senate Committee on Commerce held a hearing on unmanned aircraft systems (UAS) titled "The Future of Unmanned Aviation in the U.S. Economy: Safety and Privacy Considerations." The hearing examined the UAS industry in the United States, including the current and potential applications of UAS, and steps taken to facilitate the development of the industry through the FAA Modernization and Reform Act of 2012. Both members and witnesses testified in favor of the economic benefits UAS could have for the country.

At the ODU roundtable, Warner said that while privacy concerns have been raised about UAS, the myriad uses and potential economic benefit for the region and the country make unmanned aircraft systems imperative to explore.

"People think of UAS, or drone technology, strictly for its military use. But the potential of the technology is immense - from weather, to agriculture, to traffic planning, to delivery of packages," Warner said.

The senator also stated plainly that the pressure is on.

"The FAA has selected six beta sites around the nation. We have to make Virginia the leader among those sites."