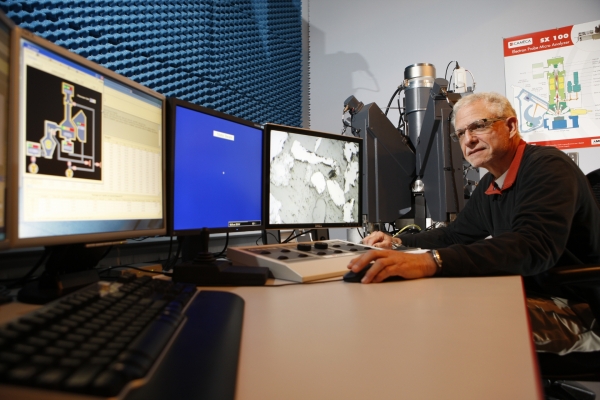 Darby at controls of the $1.2 million microprobe that allows him to trace iron grains

Year-round sea ice began occurring in the Arctic Ocean at least 44 million years ago - about 26 million years earlier than previously believed - and, in the millennia that have followed, the cycles of deep freezes and thawing in the northern polar region cannot always be linked to climate changes in the earth's more temperate zones.

Those are conclusions to be published in the journal Nature Geoscience this week by Dennis Darby, a geological oceanographer at Old Dominion University in Norfolk, Virginia.

"The demise of perennial ice in the Arctic Ocean is expected before the end of this century, and this is widely believed to be related to global climate change," said Darby. "Whether this demise will trigger even faster climate change, and whether perennial sea ice can re-form without dramatic cooling are some of the paramount issues facing climate science."

From Darby's examination of core sediment samples extracted from deep in the floor of the central Arctic Ocean, he has identified periods of freezing and thawing that sometimes were not related to warming or cooling elsewhere on earth.

The initial perennial Arctic ice formed in the Eocene period about 44 million years ago when global temperatures were warmer than they are today, so global cooling does not seem to be the only cause of perennial ice, Darby explained. This implies that the current trend toward summers free of ice in the Arctic could be reversed, and the perennial ice re-formed relatively quickly, under certain conditions confined to that region.

A little over a year ago, Darby, professor of ocean, earth and atmospheric sciences at ODU, was co-author of an article in Nature Geoscience that explained how climate patterns in the Arctic can affect weather in the Northern Hemisphere. Those findings indicated that conditions in the Arctic can definitely affect climate in North America and Europe, whereas the latest findings show that conditions in more southerly areas don't necessarily affect the Arctic.

The 2012 article identified for the first time a clear 1,500-year cycle in the Arctic Oscillation (AO), the surface atmosphere pressure pattern in the far north that greatly influences weather in the Northern Hemisphere. The findings of Darby and his co-authors for that article indicate that this natural cycle could be forcing some of the Arctic ice melting and unusual weather experienced recently in the heavily populated northern half of the globe. In a worst-case scenario that Darby described, the cyclical pressure pattern could combine with man-made climate change to exacerbate severe weather and flooding trends. In the near term, Darby said in a 2012 interview, "The implications are that the severe winters of 2009-11 (experienced in northern Europe and elsewhere) might be tame compared to what is possible, based on past swings in the AO."

Interestingly, the severe North American winter of 2013-14 lends credence to Darby's comments of more than a year ago.

One of the most expensive research instruments on the ODU campus, a $1.2 million electron probe microanalyzer, enables Darby to sift through climate clues dating back to the Eocene. His goal is to chart natural climate cycles, and to determine how those cycles may be better understood separate from random climate changes that scientists believe are caused by man-made atmospheric pollution.

An electron microprobe works similarly to a scanning electron microscope. A sample is bombarded with an electron beam, and X-rays are emitted at wavelengths characteristic to the elements being analyzed. This enables the prevalent elements present within small sample volumes (typically 10-30 cubic micrometers or less) to be determined.

Darby does his detective work by analyzing sediments, mostly from core samples that have been collected when researchers drill a hollow tube into the floor of the Arctic Ocean or nearby seas. The work is made possible by an iron-grain chemical fingerprinting technique he developed by which he determines the landmass where the grains originated. This provides evidence about winds and currents -- and therefore the overall weather patterns-that brought the grain to its resting place.

The top of a cylindrical core sample is made up of recently deposited sediments on the sea bottom; deeper down in the sample are sediments from times past. There are numerous ways to date a grain of sand depending on where it shows up in the vertical sample. Darby has worked with several samples that were deep enough (more than 300 meters below the seafloor) to have sediments dating back more than 40 million years.

For this latest Nature Geoscience report, Darby examined core samples taken in 2004 from the floor of the central Arctic Ocean during the Arctic Coring Expedition of the Integrated Ocean Drilling Program.

At intervals in the core, beginning 44 million years ago, he identified grains of iron that originated in numerous distal Arctic shelf sources, some of which are more than 1,000 miles from the coring site. "The grains are too coarse to have been delivered by ocean currents or aeolian (wind) transport, and therefore must have been rafted by sea ice," he writes in the latest article. "Because grains entrained from the shelf sources would need to drift for more than one year to reach the depositional site, I conclude that sea ice must have persisted throughout the year (during these intervals)."

Darby points out, however, that the geological record shows that the deep freezes "existed only ephemerally" - in less than 100,000-year intervals - until about 36.7 million years ago. The title of the latest Nature Geoscience article is "Ephemeral Formation of Perennial Sea Ice in the Arctic Ocean during the Middle Eocene."

The focus on the Arctic by climate scientists has guaranteed Darby a steady stream of research grants, one of them being the $500,000 contributed by the National Science Foundation (NSF) in 2009 to assist in the university's purchase of the new microprobe. Another of his NSF grants - $433,000 for a three-year project extending through July of 2014 - is for analysis of core samples from the bottom of the Denmark Strait off Greenland. The project is titled "Do Holocene Variations in Arctic Sea Ice and Greenland Icebergs Drifting Through Denmark Strait Reflect Natural Cycles?"

Darby's research is not directly involved in weighing human contributions to climate change, such as increases in carbon dioxide in the atmosphere brought on by combustion. "We're looking for natural conditions that are helping to cause this global warming and sea level rise. There seems to be a natural pacing to climate change. If you don't know what changes are naturally occurring over the long haul, you don't know how to deal with conditions over the short term."