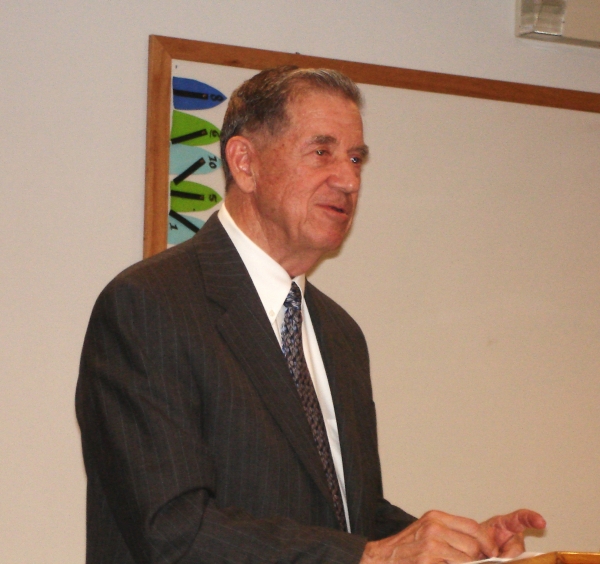 Gene G. Newman, a long-time civilian employee of the U.S. Department of Defense who was integral in bringing the discipline of modeling and simulation to Old Dominion University, died Sept. 8 following a long illness. He was 81.

Newman, of Chesapeake, a Korean War veteran, was given the responsibility of growing the capability of M&S in the Hampton Roads region in the early 1990s through the U.S. Joint Forces Command center in Suffolk. His efforts were instrumental in the development of ODU as one of the country's leading research institutions in M&S, and the growth of the modeling and simulation industry in Hampton Roads.

Through a professional relationship with Dick Whalen, ODU's military liaison at the time, Newman made a presentation to school officials about the military needs and research opportunities of the emerging field of modeling and simulation.

"Gene had ODU flowing through his coronary arteries, I'm pretty sure," Whalen said. "He was such a good ambassador for ODU, because he saw the opportunity for partnerships between the school and Department of Defense."

His efforts were instrumental in the creation of the university's Virginia Modeling, Analysis and Simulation Center (VMASC), a multidisciplinary research center based in Suffolk that is one of the country's leading academic research centers in M&S.

ODU is now the only university in the country to offer an undergraduate degree in modeling, simulation and visualization engineering, and in fact offers a complete advanced education in the discipline, from undergraduate through postdoctoral studies. The first class of undergraduates received their degrees from ODU's Frank Batten College of Engineering and Technology in May.

"It is very rare to meet someone as visionary as Mr. Newman," said Batten College Dean Oktay Baysal. "It's thanks to him that Hampton Roads is one of the few cradles of modeling and simulation in the world with tremendous economic impact. Mr. Newman will always remain a special leader for the engineering college of ODU."

VMASC Executive Director John Sokolowski said Newman was pivotal to the growth of M&S in the region and at ODU.

"Without him, we would not be here. Gene Newman was the person who really had the vision to establish VMASC and modeling and simulation in this area. He was the most significant player in M&S for ODU, Hampton Roads and the Department of Defense. He will truly be missed," Sokolowski said.

In recognition of his efforts in advancing the M&S field in Hampton Roads, the Gene Newman Award for Excellence in Modeling and Simulation Research was established in 2006. It has been awarded annually since then to the best paper at the Modeling, Simulation and Visualization Student Capstone Conference.

Newman's professional career included positions with Western Electric Co., Baxter Laboratories and more than 40 years of federal service, including 37 years in various engineering assignments with the Naval Sea Systems Command, the Naval Systems Engineering Center and the Naval Electronics Systems Engineering Center, as well as the Electronic Warfare, Communications Security and Fleet Communications Department, which he headed. In 1994, he helped establish and serve as the technical director for the Joint Training, Analysis and Simulation Center and the Deputy CIO of the U.S. Joint Forces Command until his retirement in 2002.

Among many outstanding, meritorious and superior civilian service awards in his lifetime, Newman received the Department of Defense Medal for Distinguished Civilian Service in 2001 for his "extraordinary sense of purpose and leadership" in his role in Joint Forces Command, as well as a commendation from the president of the United States.

An engineer himself, Newman initiated the development of solid-state amplifiers and integral power supply traveling wave tubes, originated the concept of providing remote technical assistance to ships at sea using data link with computer analysis software, and initiated the concept of distributed interactive process development for activities with online data entry and real-time processing and retrieval.

He is survived by his wife of 22 years, Bettina R. Newman, a son and two daughters.