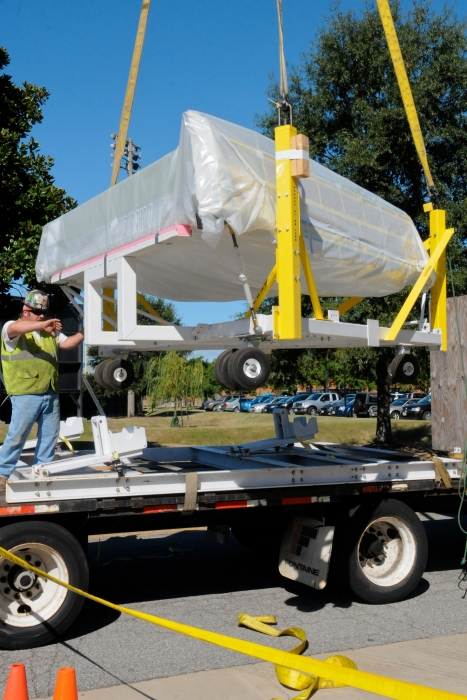 Drift chamber component is loaded for trip to Jefferson Lab 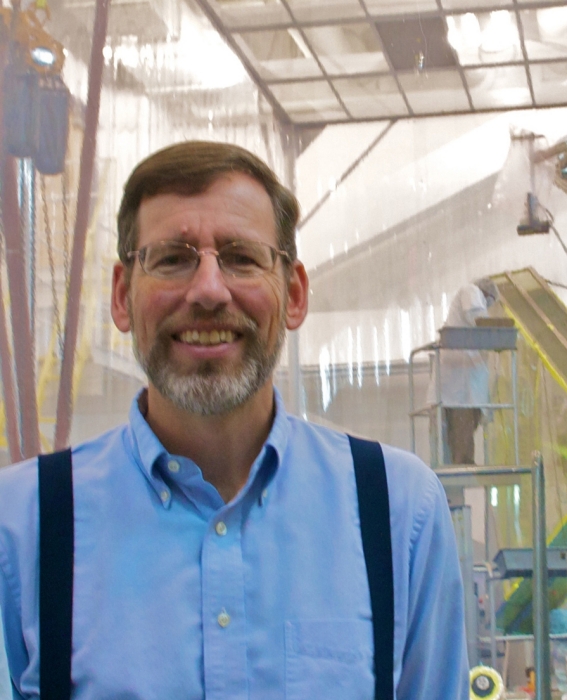 A tractor-trailer pulled away from the Nuclear and Particle Physics High Bay laboratory at Old Dominion University on Thursday, Sept. 19, loaded with the final piece of a huge, $2 million "drift chamber" built by ODU physicists to be installed as part of an upgrade at the U.S. Department of Energy's Thomas Jefferson National Accelerator Facility in Newport News.

The triangular component - you might think of it as a one-ton harp - is strung with 5,000 highly sensitive wires and required a special "air cushion" ride to the Peninsula. Four other components like it were shipped over the past 18 months. At Jefferson Lab, they will be assembled together in a full-circle drift chamber that detects particles flying from atom-smashing experiments.

"It's a great feeling," said project leader Lawrence Weinstein, an ODU Eminent Scholar and University Professor of physics who has been the lead investigator for experiments at Jefferson Lab. "We succeeded again, on time and under budget."

His reference to "again" was to note that he and other ODU physicists built one of the first drift chambers that was installed at Jefferson Lab about two decades ago.

The drift chamber, the university's main contribution to the $310 million energy upgrade at Jefferson Lab, is clearly marked with 8-foot-long Old Dominion University decals. Weinstein said that in a couple of years when the upgrade is completed and new experiments at Jefferson Lab are probing deep into the building blocks of matter, the scientists working at the lab will know who built this drift chamber.

"We had to have them specially made," said Weinstein. "Think of it as a very large bumper sticker, but even on a Hummer you wouldn't need one that big."

Critical to the project, Weinstein pointed out, was the High Bay lab that the Department of Physics took charge of when the Physical Sciences Building wing of the Oceanography and Physics Building opened in 2009. This lab replaced one that was less than half its height (located on the east side of Hampton Boulevard), where preliminary work on the project began in 2007.

The actual construction and stringing of the drift chamber components were done inside a two-story polyethylene-sided clean room that has been installed in the High Bay lab to promote the dust-free environment required for the work. Workers are also required to wear special "scrubs."

Tom Hartlove, the Old Dominion University Research Foundation Senior Lab Specialist who manages the High Bay, carefully oversaw the loading of the last component of the drift chamber on Thursday. "It's a relief," he exclaimed. "But I'll sort of miss them."

For each shipment, a large crane was hired to move a component onto an air-cushioned frame on the trailer bed. An aerodynamically engineered wooded cover was then dropped by the crane, again, very carefully, over the component and frame.

The components' gold-plated strings - with electricity running through them - will be sensitive enough to detect the subatomic debris from the experiments. In Jefferson Lab parlance, the ODU team has built the Region 2 CLAS 12 Drift Chambers in Hall B of the facility. When the energy upgrade is completed in about a year, the mile-long accelerator, which cost $600 million to build a quarter-century ago, will have doubled the energy of its electron beam, up from 6 to 12 billion electron volts (GeV).

The upgrade will provide more energetic collisions between electrons accelerated to near the speed of light and stationary subatomic targets. When the beam smashes into the experimental targets, detectors will "catch" the fragments. By studying the speed, direction and energy of the scattered fragments, scientists can unveil the inner secrets of protons and neutrons. The greater the energy propelling the beam, the more detailed the information that can be expected.

Weinstein led the ODU team in the 1990s that designed and constructed part of the original CLAS detector at JLab.

He said the components have all been moved successfully, without a single string breaking. Jefferson Lab is about 25 miles from the ODU campus.

Weinstein worked on the project with fellow physics faculty members Gail Dodge, Stephen Bueltmann and Sebastian Kuhn. The project team members are among 14 ODU professors in nuclear and accelerator physics who are affiliated with Jefferson Lab.

Work on the components has been managed day-to-day by Hartlove, with help from former postdoctoral researcher Robert Bennett and current doctoral student Holly Szumila-Vance.

The team responsible for the meticulous stringing of the instruments included Morgan Cook (team leader), Christine Bertrand, Reginald Cyrus and Brandon Oakley. Undergraduates who have participated in the project are Christian Wooten, Seth Berl, Arthur Burns and Vernon Dayawan.

Weinstein said that now that the new drift chamber work is completed a similar project will begin immediately in the High Bay lab. ODU physicists will be refurbishing 130 detector parts - each roughly 13 feet by 10 inches - that were taken from the old CLAS detector at Jefferson Lab. "We saved them from the scrap heap, and together with colleagues from MIT and the University of Tel Aviv, we will be using them in an experiment in Jefferson Lab's Hall C." That project is expected to cost about $200,000 and last for one to two years.

The ODU Experimental Nuclear Physics Group is one of the largest and most experienced research groups working at Jefferson Lab. In addition to building major detector systems for both the original Jefferson Lab complement and the new upgrade, they are leaders on a wide variety of experimental programs to explore the nature of matter. They typically lead experiments that use about 10 percent of Jefferson Lab's beam time (experimental time) each year. Applied proportionately, that amounts to about $10 million of the $100 million in research that Jefferson Lab conducts each year.