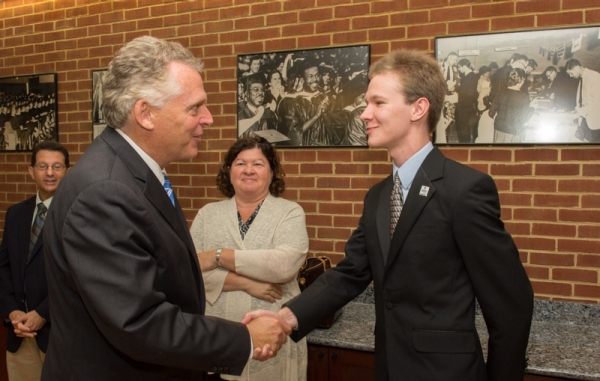 Terry McAuliffe, the Democratic candidate for governor of Virginia, offered Old Dominion University students who plan to be teachers an opportunity to be "Governor for a Day."

"I'm here to listen to all of you," McAuliffe told a dozen students from ODU's Darden College of Education during a campaign event at the university's Kornblau Alumni Center on Tuesday, Sept. 3. "Are we preparing our teachers to do what we need to do for the 21st century economy? You tell me."

In addition to seeking input, McAuliffe outlined his educational strategy for Virginia at the event. He also mentioned the "headwinds" that Virginia faces as gradual cuts to defense spending are implemented under the federal government's sequester.

A solution can come, he noted, from making smart investments in education, including better pay for teachers, amending the state's Standards of Learning (SOL) tests and placing additional emphasis on STEM-H education (science, technology, engineering, math and health).

In introducing McAuliffe, ODU President John R. Broderick noted that the university graduates the third-most STEM-H students in Virginia. McAuliffe "is very interested in hearing what we're doing in education," Broderick said. "We're always delighted when we have the opportunity to inform people who are seeking to represent us."

From the ODU students, McAuliffe heard about the value of hands-on experience in teacher training, concerns about the impact of SOLs on the ability to teach and the impact of role models in inspiring these students to become teachers themselves.

Of particular interest to McAuliffe was ODU's MonarchTeach program, which is designed to increase the number of high-quality mathematics and science instructors in middle and high schools.

MonarchTeach, a collaborative effort between ODU's Darden College of Education and College of Sciences, is modeled after the nationally acclaimed UTeach program at the University of Texas at Austin. The program allows mathematics, science and technology majors to receive teaching licensure while earning degrees in their content areas.

The ODU initiative was approved by the 2012 General Assembly along with $700,000 in funding. This is the first semester for the program, which will graduate its first students in 2017.

Connor Penley, an 18-year-old freshman from Chesapeake who is in the first class of MonarchTeach students, told McAuliffe he appreciates how the program immerses aspiring teachers in their future dream job right away. "You kind of dive right in," he said.

McAuliffe said the state needs to work as one to promote innovative programs such as MonarchTeach in order to address the needs of the future workforce and future job creators.

"I want to thank ODU, which has taken the lead with this initiative," he said. "I have to figure out how we can take MonarchTeach all over the state."